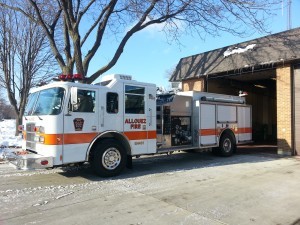 Bellin Health, a major healthcare provider in northeastern Wisconsin, is teaming up with the Green Bay fire department to check up on patients.

"Hook and Ladder" is a first-of-its-kind program in Wisconsin that targets certain people that are being discharged from the hospital. It asks them if they would like a follow-up visit from the fire department.

"It's not just the cost of Medicare dollars and things like that - there are social costs. All of us who have had a loved one who has been in the hospital - we know the time that we miss from work to visit, to help them when they get home. It's costly to a community in a variety of ways.

In the months since the pilot program began, staff of the Green Bay Metro Fire Department have visited four patients. Warner says they ask the patient if he or she is taking medication, and how they feel. As a bonus, she says, firefighters found a problem with a smoke detector in one patient's house.

She says firefighters are not being asked to provide actual medical care.

"We're asking them to use their expertise in assessing how the patient is doing and then communicating that back to us. If you think about it, the firefighter is the one whom we trust our lives with when we have heart attack symptoms. When we call 911, they came at the most serious moment in time."

Warner says Minneapolis has a similar program. Participation in Hook and Ladder is voluntary.