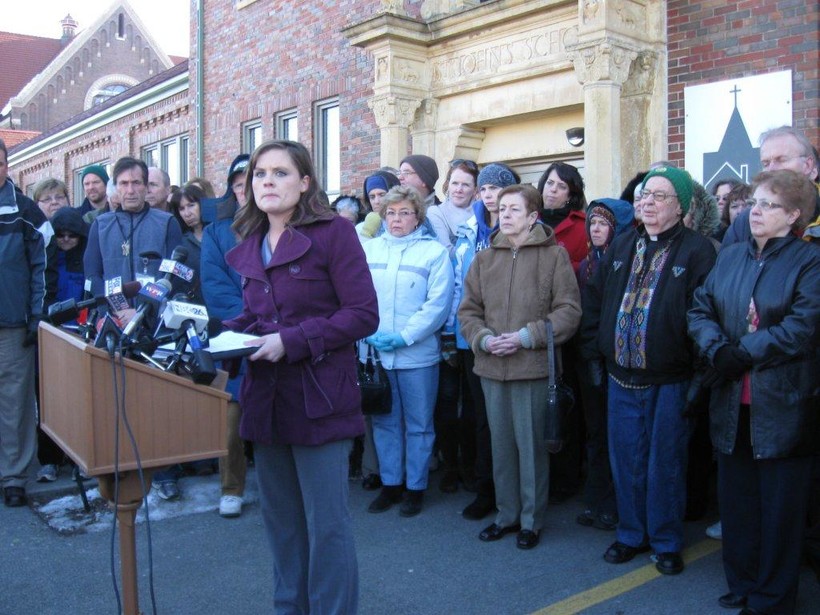 A Green Bay homeless shelter wants to increase its nightly capacity. The shelter is at odds with the city over the number of people it is allowed to house overnight.

It was 14 degrees outside St. John the Evangelist's when the media gathered in the shelter's parking lot for a news conference. The shelter currently has a permit to house 65 people. This winter it has regularly exceeded that limit and has a temporary agreement with St. Norbert College to handle the overflow, but that will end when students return next week.

The shelter is run by the Catholic Church. St. John's Shelter Director is Alexia Wood. She is asking the city to re-visit the shelter's Conditional Use Permit because of newly completed renovations that should allow the nightly population to rise to 84. "Unfortunately there is an emergency throughout the city of Green Bay, and ... needs have been great on a regular basis. So we operated in good faith that the operational plan would outline what that overflow would look like, and now we're looking to clear up any confusion by reopening the permit altogether and have a set bed capacity of 84."

The city is taking the shelter to court and threatening fines of $500 for each day it exceeds its population limit. St. John's is pleading not guilty.

Residents near the downtown shelter have complained to alderman Dave Boyce. He's heard concerns of vagrancy during the daytime when the shelter must close its doors, "Sometimes they have groups of people trying to figure out what to do between the time they have to leave the shelter and then come back."

The next scheduled court appearance for shelter officials is February 5.