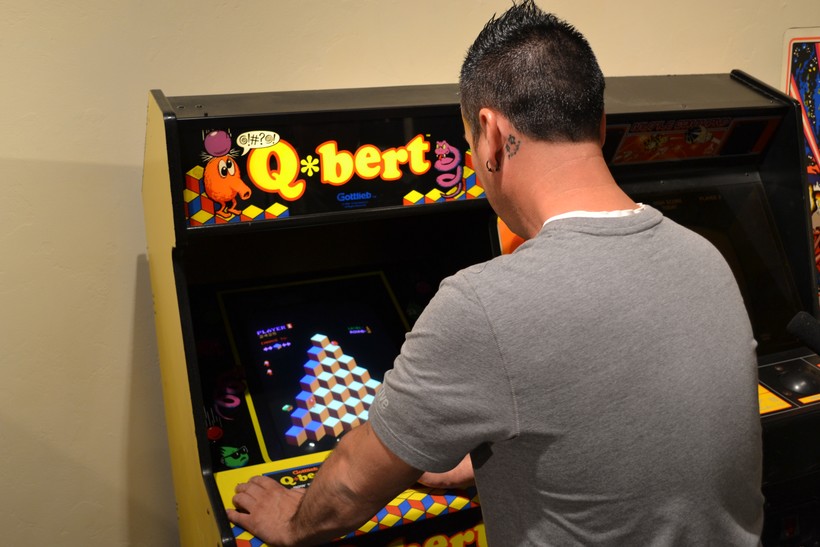 Staples of 1970s and 1980s youth are on display in a Green Bay museum. Arcade video games have been brought to life in a summer-long exhibit.

Eighty video games are in the exhibit at the Neville Museum. Bradley Czech has amassed the collection, buying his first machine when he was just 13 years old.

Not to mention Fantasy, Reactor, Frogger, Dig Dug, and a game based on the rock band Journey. Oh, and an early '70s iteration of Pong, the granddaddy of all video games.

Czech is a Green Bay radio DJ with an obvious predilection for video games. And he says they are art. Once he tracks down a game he restores it to the point of "playability" and puts the often eccentric side panel art back in shape.

"The right amount of time has gone by now that people can really appreciate this stuff again."

Also, people who have never really had the chance to experience a video arcade game first hand - like these little boys playing Space Invaders, or their classmates, fourth graders Laura Wilkins, River Bouquette, and Anastasia Rivera.

"Eventually, Ms. Pac-Man came out and that changed everything because that had all different levels. Then there's other variations - Baby Pac-Man, Junior Pac-Man. There was Pac-Land. There was Pac-Mania. There was a game called Professor Pac-Man, which was a quiz game based on Pac-Man."

Because of its popularity, Pac-Man isn't so valuable. Instead, Czech guesses his most rare and most valuable game is a stinker based on "The Three Stooges." No one liked to play it and very few remain.

Only about 12 games will be available to play. Matt Welter is the Neville Museum's curator of education. He says most of the machines will be cordoned off in deference to the works of art he believes they are.

"These are antiques - and that's going to be the challenge of this exhibit. We're going to have things all around these different exhibits because they are antiques. We're so used to just seeing them and saying, 'Oh, let's play!'"

Count Bradley Czech as among those who can't resist the urge to play. He fired up his Q*bert machine circa 1982.

"The clunking is the sound of Q Bert Falling as if he fell inside the machine."

Besides the "playability" factor and the airbrushed side panel art, Czech feels the machines harken back to the days when what was available in an arcade was just plain better than the home systems.

"I think it's a great way to show people what it was like back in the arcade days. Doing an exhibit like this shows people what a cultural impact these games were back in the early 80's. I think people have forgotten that."

The exhibit runs until September.