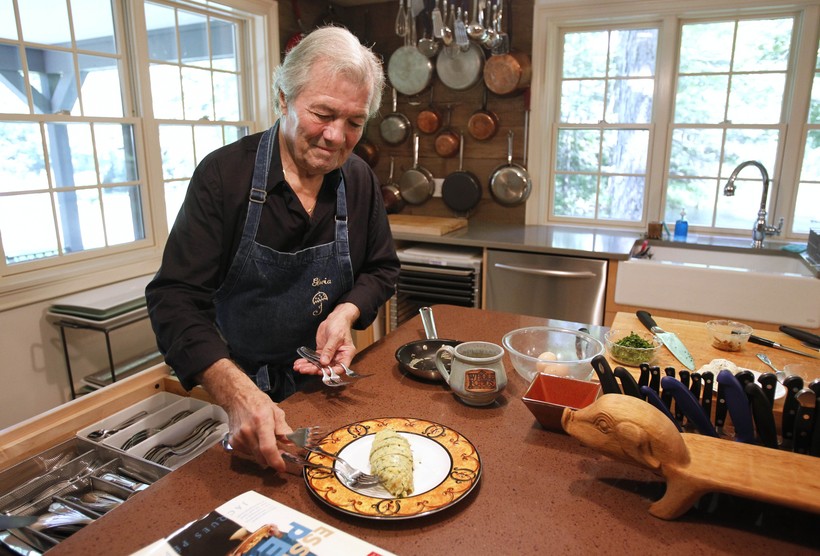 Chef Jacques Pepin places silverware on a plate with an omelette at his home in Madison, Conn. Steven Senne/AP Photo

A Grandfather's Lessons: Jacques Pépin On Cooking With His Granddaughter

Jacques Pépin is in the kitchen, his tiny six-year-old granddaughter, Shorey Wesen is next to him. She’s standing on a box so she can reach over the counter.

With a grin, she asks him, "Can I?" and dips her finger into a bowl of chocolate to taste it. She spills a drop on her chin.

"I remember I had chocolate on my face like the entire episode," she says, laughing. "And I watched it just recently, actually and I was like, 'What was I thinking, why didn’t anyone get that off of my face?'"

Pépin is a world-renowned French chef. Shorey practically grew up in the kitchen with him, he says.

"She loved chocolate and any type of desserts," he said.

Pépin said it was important to him to get his granddaughter involved in the cooking process over the years, and he encourages other parents and grandparents to do the same.

It was that idea that inspired the two to create a new cookbook together: "A Grandfather's Lessons: In the Kitchen with Shorey."

"In the cooking together we bring a lot of other things in there," Pépin said. "For example, with the tomato I say, is the tomato a fruit or vegetable? Where does it come from? Then I ask her, give me three tablespoons of butter. How many tablespoons do I have in that stick?... We bring mathematics in it, we bring all kind of things through food, you know."

Pépin keeps the food simple. And while he's written many cookbooks, simplicity is a thread that runs throughout his work. It was especially important to do the same with this book, he says.

Wesen admits growing up in a foodie family meant she didn’t have a choice to be a picky eater, it's something she’s happy about now.

But their new cookbook includes recipes that even a fussy eater would love, like tomato soup.

"I love tomato soup, I grew up eating it," Wesen said. "So, yeah, this really tastes like home."

Pépin says the recipe is simple on its own, but versatile enough to spice up any way you’d like.

Even the simple recipes, though, have a little twist. Like the cottage cheese pancakes with blueberries that are featured.

Pépin says the cottage cheese adds moisture, texture and a different taste to the pancakes. Wesen loves eating them for breakfast.

Since Wesen has always loved chocolate, the cookbook includes some simple, but fun, chocolate dishes, including tiny chocolate, nut and fruit treats.

"You have a beautiful little dessert which you would spend a fortune in the restaurant to have," Pépin said.

But it’s much simpler. Pour melted chocolate into tiny paper cups, and embed nuts and fruits into the soft chocolate. Refrigerate the chocolate until it hardens, and remove the cups.

The two use a similar technique in the cookbook with balloons to create little chocolate bowls.

"You take the balloons and you blow them up and you sort of roll them in the (melted) chocolate," Wesen said. "You put them in the fridge and let the chocolate harden. And then afterwards you can pop the balloons and take them out and you have this beautiful chocolate (goblet) you can put mousse, or whipped cream, and it’s a really nice presentation."

The cookbook includes instructions for kids to learn how to fold a napkin and set a table, as well as basic table manners.

But Wesen says if kids want to cook, the first thing to do is try.

"Find something that you enjoy eating, and find a simple recipe for it and then just try and make it. There’s not much that can go wrong," she said. "My friends and I, we sometimes try and make food together and it’s usually more about the process of actually making the food rather than the outcome because it’s not always so great."

A CAFO, contractors lied about how much manure they spread on fields. Now the state is suing them.
McDonald's franchise owners are caught violating child labor laws
Nearly 2 years after it was slated to close, staffing shortages continue to plague Wisconsin youth prison
Federal labor regulators and Superior police investigating death of worker at Superior shipyard
‘I look up to you’: Pioneer female quarterback in Wisconsin inspires after touchdown pass