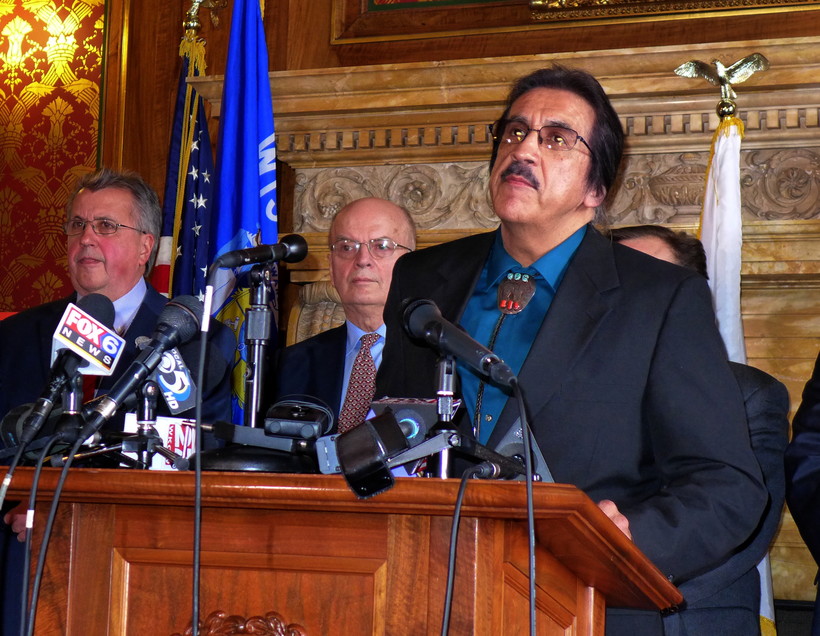 Gov. Scott Walker's administration has rejected an offer by the Menominee Tribe to finance the state's share of a new Milwaukee Bucks arena in exchange for approval of a Kenosha casino.

Menominee Tribal Chairman Gary Besaw had offered to post a $275 million bond to cover possible losses to the state and help fund a new arena, but Department of Administration Secretary Mike Huebsch told reporters in Madison that the latest proposal by the Menominee and Hard Rock International was not viable. He said that if it had been, they would have talked about it before Tuesday.

Walker initially rejected the initial Kenosha casino plan in late January, saying that because the Potawatomi Tribe has threatened to withhold its casino payments if the Kenosha casino went forward, taxpayers would be at risk.

Jim Allen of Hard Rock International said the casino would earn $500-600 million per year, which he said is more than enough to cover the promises the tribe is making.

The Menominee also disputed the contention that its offer wasn't viable, questioning why Huebsch didn't at least want to learn more about the plan before rejecting it.

The rejection did not sit well with casino supporters in Kenosha, either. Lou Aceto owns a men’s clothing store in downtown Kenosha, and is also a strong casino supporter who voted for Walker three times. He wasn’t happy when the governor rejected the casino last month, and he’s even less happy now.

“Once again he’s got me speechless,” said Aceto. “I don’t understand it. This sounded like a win-win-win — a win for everybody.”

Aceto, along with Kenosha Mayor Keith Bosman, believes the Menominee and their development partner, Hard Rock International, should not take this second no for a final  answer.

The Bureau of Indian Affairs has said it would allow the governor to change his mind right up until its Feb. 19 deadline, something that even casino supporters now admit isn’t likely.