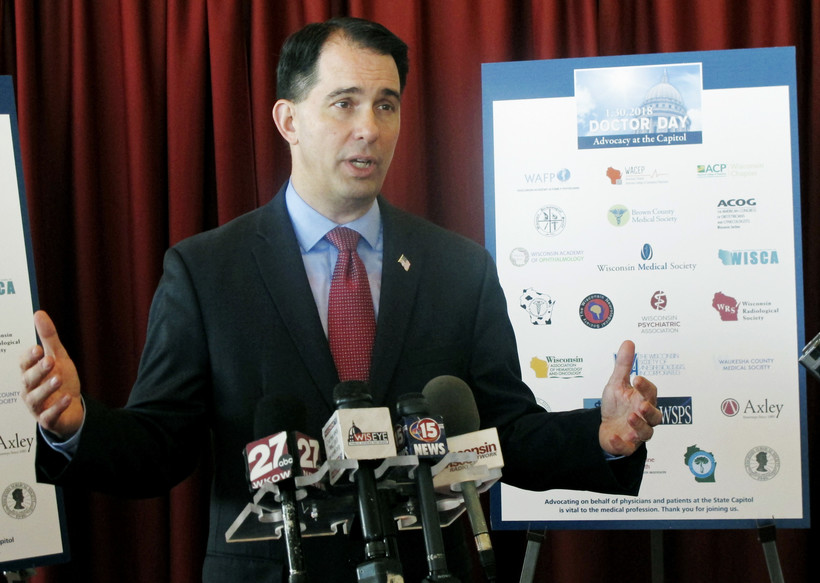 Governor Wants To Protect Those With Pre-Existing Conditions, Lower Premiums For Those Buying Their Own Insurance
By Shamane Mills
Share:

Gov. Scott Walker addressed doctors Tuesday at the Wisconsin Medical Society's annual lobbying "Doctor Day" in Madison. During the event he talked about protecting people with pre-existing conditions and controlling premiums for those who don’t get insurance through work.

Walker said premium increases this year are in the single digits for those getting insurance through their job, less than 5 percent on average. But those buying coverage on their own are seeing premiums spike 36 percent or higher. Walker wants federal permission to set up a reinsurance fund to offset the costs of those with expensive conditions.

The fund would consists of $150 million in federal money and $50 million from state Medicaid savings.

"So the individual market we want to be about the same level that the group market is at. So then, not only will it drive premiums down, making it more affordable for small business owners, people who work at small businesses, people who run their own family farms, which has been the biggest area of challenge, on top of that going forward, we believe that will then make that market attractive again for others to come in so there will be more choices for our consumers," Walker said.

Walker got applause when he told doctors he wants a state law to protect those with pre-existing conditions. Federal law already does.

"No matter what happens in the future in Washington (D.C.), no matter what changes they do or don’t make to the Affordable Care Act in Wisconsin, going forward pre-existing conditions will be covered so we don’t ever have to worry," he said.

Walker's plan would only kick in if similar protections in the Affordable Care Act are repealed. Some Republicans like U.S. Sen. Ron Johnson tried and failed to have those protections removed last year. State Democratic lawmakers say Walker's plan would allow insurers to charge people with pre-existing conditions more.

"Gov. Walker’s plan takes us backwards. There is no stability in his plan if it means that health insurance companies can provide fewer protections for people with pre-existing conditions that are in current federal law," said Rep. Daniel Riemer, D-Milwaukee, in a statement before Walker unveiled his proposal in the State of the State speech.

Walker also told doctors Tuesday that he plans to seek a permanent federal waiver for SeniorCare — the state-based program helps those 65 and older pay for prescriptions.