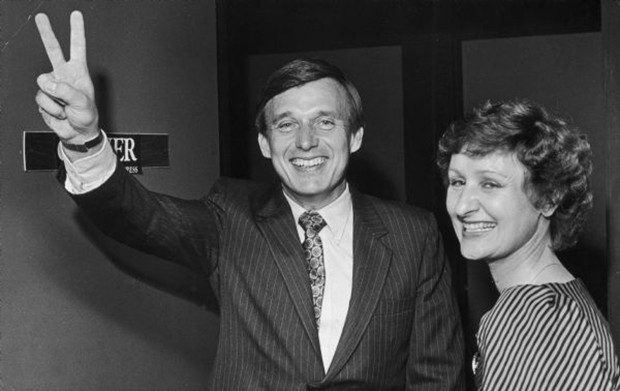 From Governor To Caregiver: Schreiber On Helping A Loved One With Alzheimer’s

About 10 years ago, Martin Schreiber started noticing that his wife of 54 years, Elaine, would get lost while driving to familiar places. He knew something was up when during one of Elaine’s long-standing and elaborate German home-cooked dinners for friends, she added the wrong ingredients and overcooked parts of the meal. She was diagnosed with Alzheimer’s soon afterwards.

As a former governor and lieutenant governor of Wisconsin, Schreiber and his wife had lived a rich social life; she had been his constant companion throughout his political career, not only supporting him in his campaigns but also taking care of the household and bringing up their four children.

They had first met in high school when Schreiber was 14 years old and he said he knew immediately that she was the one. They have been together ever since.

After Elaine was diagnosed with Alzheimer’s, Schreiber’s life started changing. He wasn’t prepared for the loneliness that comes from being with someone who is physically present, but increasingly emotionally absent.

"You find out that you are now living with a person who once was," said Schreiber. "You’ve finding out that the person who you were with for many years of marriage and childrearing and so forth is no longer there. And so, what you learn too late is that you have to learn how to let go of the person that once was."

A third of the caregivers for the over 5 million Americans who suffer from Alzheimer's are age 65 or older. While there have been numerous studies on how loneliness impacts the elderly, few have looked into the particular loneliness that comes from caring for someone in cognitive decline.

According to Rose Beeson, a nursing professor the University of Akron, in Ohio, caregivers increasingly experience relational deprivation, which can lead to a slew of physical and mental health issues. A 2003 study Beeson published in the Archives of Psychiatric Nursing, found loneliness to be a major factor in the development of depression among caregivers of spouses with Alzheimer’s.

As a result, the caregiver, who is often an elderly spouse, has to take over all the roles that were previously shared.

"The caregiver has to take over 100 percent of the role of life, not only for themselves ... but also the 100 percent care of the person," Beeson said.

This has been the case for former Gov. Schreiber, now 76, who said he started curtailing social interactions so his wife would not feel embarrassed when she struggled to find her words, and stopped going to his athletic club because he was worried she may wander off.

"I found myself morphing from a loving husband into a caregiver," said Schreiber. "(It's) an insidious kind of situation where you really don’t know what’s happening to you and you begin to lose focus on everything else around you other than the caregiving."

Both Beeson and Schreiber stress the importance of caregivers realizing they can’t do it alone and asking for help from family members, friends and organizations like the Alzheimer’s Association, which has a 24-hour helpline and many free resources for caregivers.

"I use the analogy of putting on your own oxygen mask first," said Schreiber. "If you don’t take care of yourself, you become ill; if you become ill, you are less capable of caring for your loved one. You have less patience, and you are of less use to everybody; not only the patient, not only yourself, but to your children and to your grandchildren."