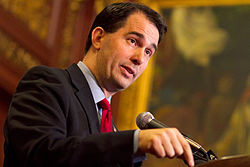 Republicans in several states have been mulling plans to change from a winner-takes-all system of counting electoral votes to a system where they're counted in part by congressional districts. In the 2012 election, that would have split Wisconsin's electoral votes in half, even though President Obama won the state by 213,000 votes.

Walker told reporters he was concerned that would make Wisconsin less competitive in national elections, "I'd like to see in this state, Republican and Democrat alike, voters, have an opportunity to hear from the candidates. And one of my concerns with a change would be that it might make it less likely that presidential candidates would come into the state."

In the past, Walker has called the proposal "interesting." While he's never said he would sign it, he's also never promised a veto.