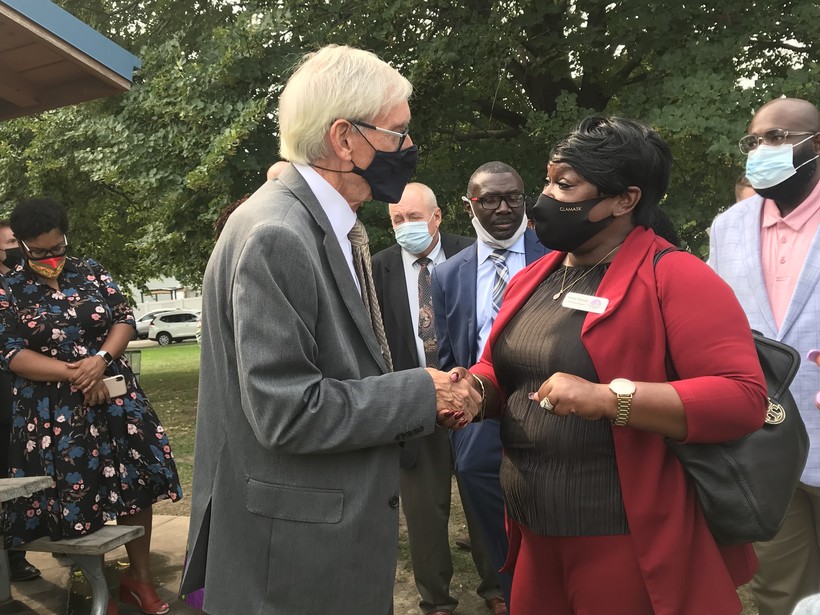 Gov. Tony Evers, left, shakes the hand of Yvette Patrick, right, who received a pardon in February 2021. Evers met pardon recipients at Johnsons Park in Milwaukee on Tuesday, Sept. 7th, 2021, where he signed an executive order to expand access to pardons and expedite the process for certain individuals who meet stringent criteria. Madeline Fox/WPR

Evers Has Approved 263 Pardons Since Reestablishing Pardon Advisory Board In 2019
By Madeline Fox
Share:

Evers has granted 263 pardons while in office and reestablished the pardon review board, which sifts through pardon applications and sends approved candidates to Evers’ desk to sign.

"We’re on target in my first term to pardon more than any governor in recent history," Evers said.

The pardon board was disbanded under former Gov. Scott Walker, who did not sign any pardons while in office for eight years. Evers took office in 2019.

In Wisconsin, people are only eligible for pardons at least five years after completing their sentence and if they have no pending criminal charges or cases. Previously, applicants could only be pardoned for their most recent felony, but under the new executive order, people who are five years past completing all their sentences will be able to apply for pardons for multiple felonies.

"We found there were folks who were not able to receive a pardon, not because their crime was more serious or because they posed a greater risk to the community, but simply due to the timing of their convictions and the sentencing," Evers said. "This change will allow folks to apply whose circumstances are not drastically different from other eligible applicants or even those who have already received pardons."

The chair of the pardon advisory board will also be able to expedite some applications that meet more stringent criteria, forwarding them directly to the governor’s desk without a hearing or executive action from the entire board.

"This will help get these nonviolent, low-level offenders through the system quicker and on the road to their next goal," said Evers.

Evers said the pardon process already has a backlog, and estimated there are hundreds of applicants waiting for a decision. He said the expediting of the process under his executive order could increase the state’s pardon output by 25 percent. 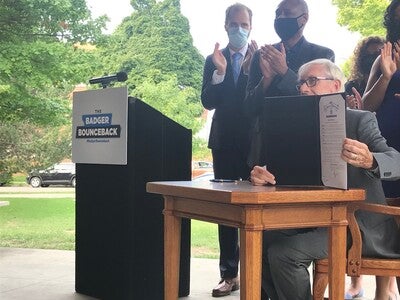 Nate Bolton, a member of parole board and director of diversity and inclusion at the Milwaukee County Transit System, said the board’s work is focused on identifying people who made mistakes, but worked to not be defined by their missteps.

"We have interacted with a lot of people who made a mistake early in their life, turned it around, raised families, built careers, gave back to their community, and ultimately were able to reach that ultimate point of official redemption by going through the pardon advisory process and ultimately receiving a pardon from the governor," he said.

Jason Alston, owner of Heaven’s Table BBQ in Milwaukee, was one of the most recent pardon recipients. He was sentenced to prison after twice being found in possession of illegal substances, but said from the day he arrived, he was looking for ways to move forward with his life.

When he was released, he attended culinary school at Milwaukee Area Technical College and got his bachelor’s degree in business management from Cardinal Stritch University. He said he worried about how his conviction would affect his eligibility for educational opportunities and housing, and ran into roadblocks in both.

"For those that are receiving and have received (pardons), I know your journey, I know how hard it was, I know how sleepless some nights could have been, but I want to applaud you for staying out of trouble and just staying focused," Alston said.

The board estimated it rejects about a third of pardon applications.

A pardon doesn't expunge someone's criminal record, but restores some rights lost after a felony conviction, including the right to run for office and the right to hold certain professional licenses.

"The work that all these 263 individuals have done to move their lives forward in a positive, constructive way is truly, truly amazing," said Evers. "It’s a great success story, not for me, but for them and their families and the loved ones that are helping them."