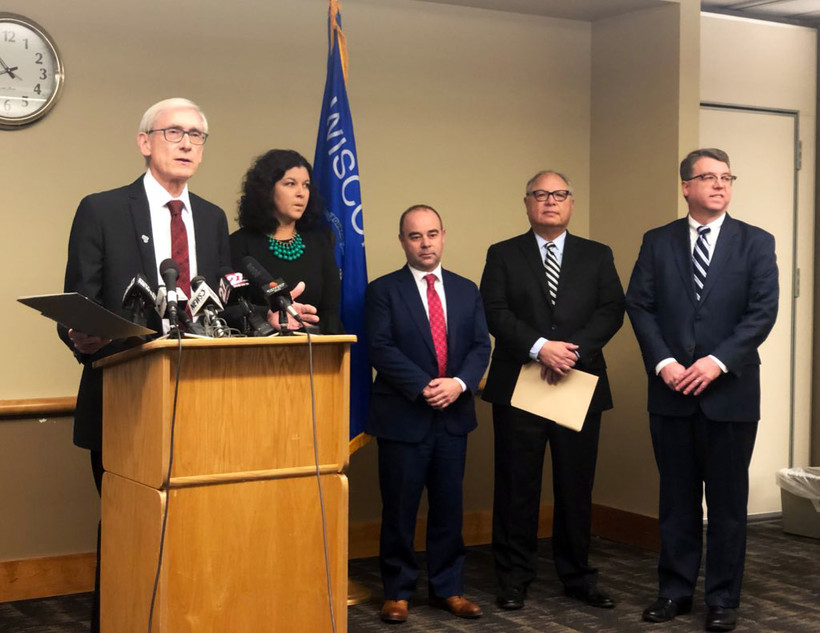 Gov.-elect Tony Evers announced four more appointments to his cabinet on Friday, including his pick to head the state Department of Transportation.

Evers said he’s assembling his leadership team with an eye on collaboration.

"We have, obviously, a lot of problems in the state that are going to take more than one individual and one agency to fix," Evers told reporters at an event in Madison.

Evers tapped Craig Thompson to lead the DOT as the state continues to grapple with how to address road funding.

Thompson works as executive director of the Transportation Development Association of Wisconsin. Prior to that, he served as the legislative director for the Wisconsin Counties Association.

"It’s a daunting endeavor, I don’t underestimate that, but I’m eager to get started," Thompson said.

Thompson echoed Evers’ campaign trail sentiments that a gas tax increase could be on the horizon for Wisconsin, but declined to say how much that increase might be. He said all options need to be on the table as the administration and lawmakers negotiate a fix.

Thompson said a new approach at the Capitol will be necessary to get that accomplished.

"There are some voices in this state that want to pit the rural areas against the rest of the state and vice versa, but I will tell you, we will not solve our transportation issues until we view our transportation system as just that — a system," Thompson said.

The governor-elect also named Brad Pfaff as the new head of the state Department of Agriculture, Trade and Consumer Protection.

Pfaff currently serves as the deputy chief of staff to Wisconsin U.S. Rep. Ron Kind. Previously, he worked as executive director of the U.S. Department of Agriculture Farm Service Agency during the Obama administration.

Pfaff said his upbringing in a family of farmers in La Crosse County will inform his work.

"The farm framed my values," he said. "Agriculture is more than just economics — in many ways, it is what unites us as a people."

Evers also named Mark Afable as commissioner of insurance and Rebecca Cameron Valcq as the head of the Public Service Commission.

Afable is the chief legal officer at American Family Insurance. Prior to that, he served as counsel for the National Association of Independent Insurers. Valcq is currently a partner at the law firm Quarles & Brady, where she specializes in energy, environment and natural resources law. Before that, she worked as regulatory counsel for We Energies.

Evers made his first cabinet appointments earlier this week. He has said he hopes to announce most of his cabinet before the end of the month.