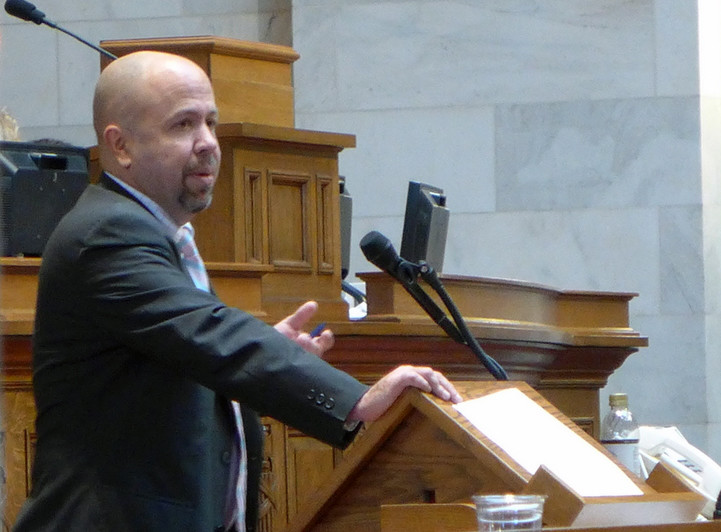 Steineke Supports Investigation Into 2020 Election But Says It Won't 'Result In Much'
By Rob Mentzer
Share:

The Republican majority leader of the state Assembly is pushing back against conspiracy theories and "misinformation" about the presidential election in Wisconsin, but says he favors a legislative investigation into the 2020 vote.

Jim Steineke, R-Kaukauna, appeared Monday on WPR's "The Morning Show." He downplayed claims of widespread voter fraud and said a lawsuit brought on behalf of Republican President Donald Trump in Wisconsin had no merit. But he also said the Assembly's election committee should "take a look at things."

"I'm one that believes no matter what happens, it is unlikely to uncover any kind of nefarious activities that would overturn the results of the election in Wisconsin," Steineke said. "I don't believe there was widespread fraud large enough in numbers to overturn the result."

Democratic President-elect Joe Biden won Wisconsin by fewer than 21,000 votes — a margin of less than 1 percent of the 3.2 million votes cast, but still well above the margin of votes changed in previous election recounts. In 2016, for example, a recount initiated by Green Party candidate Jill Stein changed the margin by about 1,500 votes as a result of technical errors made during the first count. The Trump campaign has said it will request a recount in Wisconsin, but has not initiated one.

However, Steineke said an investigation by the Legislature’s elections committee could help to shed light on unusual aspects of 2020's election, including the "explosion of people using the designation of 'indefinitely confined' to receive an absentee ballot" amid the COVID-19 pandemic. In some cases, he said, social media has fueled false claims about widespread voter fraud.

"Of course we know most of that stuff is nonsense, but people are concerned about it," he said. "I support the idea of taking a look at it, I just don't think it's going to result in much."

Steineke’s statements about the value of legislative investigations echo those made last week by Assembly Speaker Robin Vos, R-Rochester, but he went further than Vos in asserting that the state’s election outcome was fairly decided. He also directly contradicted the notion put forward by Rep. Joe Sanfelippo, R-New Berlin, who said last week that legislators could choose a slate of electors who would vote for Trump in the electoral college. The state's electors are chosen by the Wisconsin Elections Commission, not the Legislature, based on the certified winner of the state’s popular vote.

Shortly after the election, Democratic Assembly Minority Leader Gordon Hintz, D-Oshkosh, told WPR the purpose of GOP vote investigations was to "undermine credibility and trust in high turnout in some of our biggest cities."

On Sunday, Trump wrote on Twitter that Biden "won because the election was rigged," and later on Sunday and again on Monday wrote, "I won the election." He has refused to concede to Biden even as all major news organizations have called the election for Biden for over a week.

The president has also participated in the spread of misinformation and conspiracy theories about the election. Legal challenges to vote totals from Trump's team and supporters in various swing states have hit numerous roadblocks. In Wisconsin, a lawsuit brought on behalf of the campaign that sought to throw out votes in Dane, Milwaukee and Menominee counties was dropped by the plaintiffs Monday.