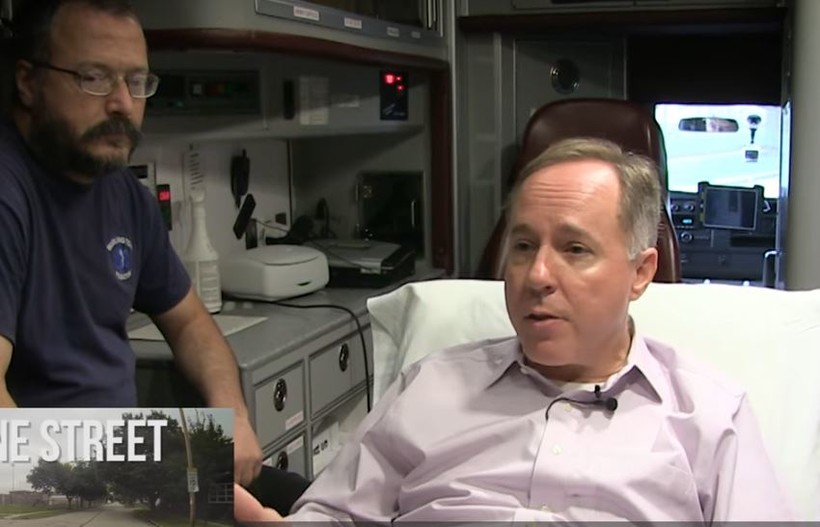 Wisconsin Assembly Speaker Robin Vos rides in the back of an ambulance in a video to make his case for transportation funding.

Republicans on competing sides of the debate over how to pay for Wisconsin's transportation needs tried to get a jump on budget deliberations Monday, with GOP senators highlighting the cost of increasing gas taxes and the state Assembly speaker riding in the back of an ambulance to illustrate the need to fix Wisconsin's bumpy roads.

The GOP lawmakers made their pitches in advance of a Tuesday hearing on Gov. Scott Walker's transportation plan. They're just the latest signs that this budget cycle may be more contentious than usual.

Sens. Chris Kapenga of Brookfield and Duey Stroebel of Saukville released a memo from the nonpartisan Legislative Fiscal Bureau outlining two scenarios. In one, they asked the fiscal bureau to calculate how big of a gas tax increase would be needed to cover the entire cost of the state Department of Transportation's backlog of projects for highway rehabilitation, major highway development and southeast Wisconsin megaprojects. In the other scenario, the senators asked how much the gas tax would have to go up to fund only the projects spelled out in the governor's proposed budget without any new borrowing.

Covering the entire cost of new transportation projects would require a 28-cent-per-gallon increase in the gas tax while covering only the projects in Walker's budget would require a 7-cent increase, according to the fiscal bureau. Kapenga and Stroebel said either option was irresponsible.

"The wrong answer is a permanent tax increase on taxpayers," Kapenga told reporters during a conference call. "That is not a prudent decision."

Historically speaking, either tax hike scenario is unlikely. The fiscal bureau noted Wisconsin has typically funded roads with a mix of cash and borrowing while this memo assumed there would be no new borrowing at all.

The fiscal bureau also noted that if Walker's transportation budget is approved – no matter how it's funded – it would delay several major highway projects, the Milwaukee Zoo interchange project and the I-94 north-south freeway project. Both Kapenga and Stroebel said they supported Walker's roads budget.

Meanwhile, Republican Assembly Speaker Robin Vos, an outspoken opponent of Walker's transportation plan, took a far different approach to make his argument Monday, releasing a video showing him riding in the back of an ambulance in Racine County. Vos reacts incredulously as the ambulance rattles and shudders down the road.

"I never even thought of a difference of being in an ambulance like this versus riding in your car where you think, yeah, there's a pothole, but it's not that big a deal," Vos says in the video as the camera and ambulance shake. "Imagine you're sitting here. Look at this. Holy cow. I can't even imagine."

Vos released a statement later in the day attacking Kapenga and Stroebel for their memo, saying nobody was suggesting the state raise its gas tax to cover all the costs of road projects.

"While it's laudable that (Sens.) Kapenga and Stroebel say they're relying on their CPA and business experience to analyze what they describe as the transportation fund's spending problem, they're deliberately ignoring the other side of the balance sheet in favor of politics and fear mongering," Vos said.

Walker's office also weighed in, saying the governor's budget would increase funding for road maintenance while reducing borrowing. He also reiterated his pledge to hold the line on transportation taxes.

"When I ran for reelection in 2014, I made it clear I would not support increases to the gas tax or vehicle registration fee without corresponding decreases in other state taxes," Walker said in a statement. "I am going to keep my promise to the people."

Transportation funding proved to be a major sticking point among Republicans in the last budget as GOP lawmakers refused to approve Walker's plan to borrow $1.3 billion for roads. The plan they ultimately approved reduced borrowing to $850 million.

Walker's latest budget proposal would borrow roughly $500 million. While that's the lowest level of new bonding in several years, it would still leave the state spending more than 20 cents of every dollar of transportation revenue to pay off old debt.