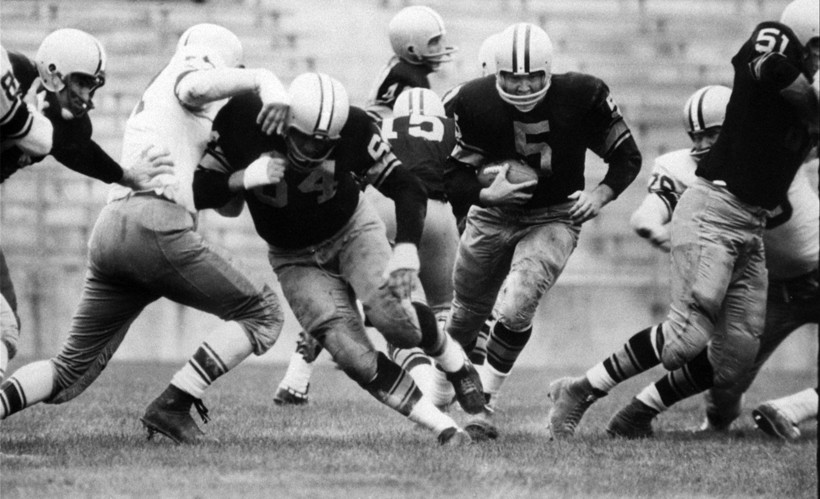 In this Aug. 10, 1959 file photo, Paul Hornung (5) of the Green Bay Packers goes through the line in an inter-squad game in Green Bay, Wis. Hornung, the dazzling “Golden Boy” of the Green Bay Packers whose singular ability to generate points as a runner, receiver, quarterback, and kicker helped turn them into an NFL dynasty, has died, Friday, Nov. 13, 2020. He was 84. AP Photo

'The Golden Boy' Is Laid To Rest In Louisville

The Packers selected Hornung with the No. 1 pick in the 1957 NFL Draft. He played nine seasons with Green Bay, winning MVP in 1961. Head coach Vince Lombardi said Hornung was the greatest player he ever coached.

"Paul was a leader of Green Bay's dynasty in the 1960s and instrumental in growing the popularity of the Packers and the National Football League," NFL Commissioner Roger Goodell said in a statement.

Horning played in a different era of football. In 1960, he set a single season scoring record that stood until 2008. That year, he not only scored 15 touchdowns, but also served as the Packers’ placekicker, tallying 15 field goals and 41 extra points.

In 1961, Hornung was called to active duty by the United States Army, along with several other Green Bay players. The Associated Press reported U.S. Sen. Alexander Wiley, R-Wisconsin, asked the Defense Department to reconsider the move after complaints from Packers fans.

Though Wiley’s petition was unsuccessful, Lombardi was close friends with President John F. Kennedy, who pulled strings to grant Hornung a weekend pass to play in the NFL Championship against the New York Giants, according to author A.J. Jacobs. Horning scored 19 points and was named MVP of the game.

Hornung won a total of four NFL Championships with the Packers, though late in his career, he missed the team’s Super Bowl I victory due to a neck injury. He also missed the entirety of the 1963 season after being suspended for gambling on NFL games, though he never bet against the Packers.

Hornung was never an altar boy, the priest said during his service at St. Louis Bertrand Church in Louisville, but he was a good man. A family friend shared the story of Hornung sending 40 New York City fire fighters to a Notre Dame-Navy game following 9/11.

"As for the fans, you’re always in his heart. And his teammates, you made him what he was," the friend said. 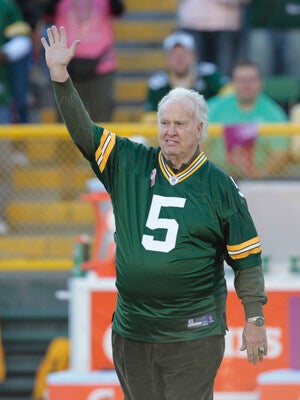 In this Oct. 2, 2011 file photo, former Green Bay Packer Paul Hornung waves to the crowd during an NFL football game in Green Bay, Wis. Hornung, the dazzling “Golden Boy” of the Green Bay Packers whose singular ability to generate points as a runner, receiver, quarterback, and kicker helped turn them into an NFL dynasty, has died, Friday, Nov. 13, 2020. He was 84. Mike Roemer/AP Photo

Nicknamed "The Golden Boy" for his blonde hair and handsome looks, Hornung won the Heisman Trophy as quarterback at the University of Notre Dame. In fact, he was the only player from a losing team ever to earn the honor.

As a senior, he led the Fighting Irish in nearly every statistical category, including passing, rushing, kickoff and punt returns, field goals and passes broken up, according to the Louisville Sports Commission. It’s a feat unimaginable in today’s game. The Paul Hornung Award now honors the most versatile player in college football.

After retiring from football, Hornung worked as a sports commentator and forged a career in real estate. He also tried his hand at acting, appearing in memorable spots for Miller Lite and Marlboro.

Hornung died last week after a yearslong battle with dementia. He was 84.