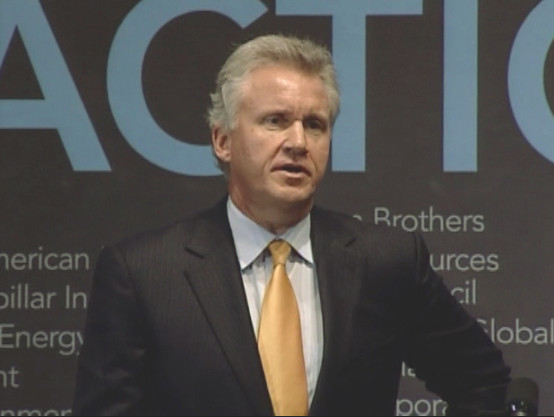 General Electric CEO Gives Advice To The UW Board Of Regents

General Electric chairman and CEO Jeffery Immelt addressed the University of Wisconsin Board of Regents this morning.

Immelt said that universities need to work with businesses more to grow the economy, which he says is not growing fast enough. He told the Regents that education is the most important investment the United States can make in order to be competitive in the next 10 to 20 years.

He also offered some advice on how the system can convince lawmakers to boost state support.

"The best step that you can take is to make sure that this is the best-run university in the country," said Immelt. "That you have metrics, that you can go to the legislature, to Governor [Scott] Walker ... and say 'Look, my own house is in order; now give me more money.'"

Lawmakers and the governor froze tuition at UW when it was learned that the system had a $1 billion cash surplus.

Immelt's comments this morning were briefly interrupted by two protesters, who object to the company not having to pay corporate income taxes in recent years. UW-Madison police say they were arrested and cited for disorderly conduct.