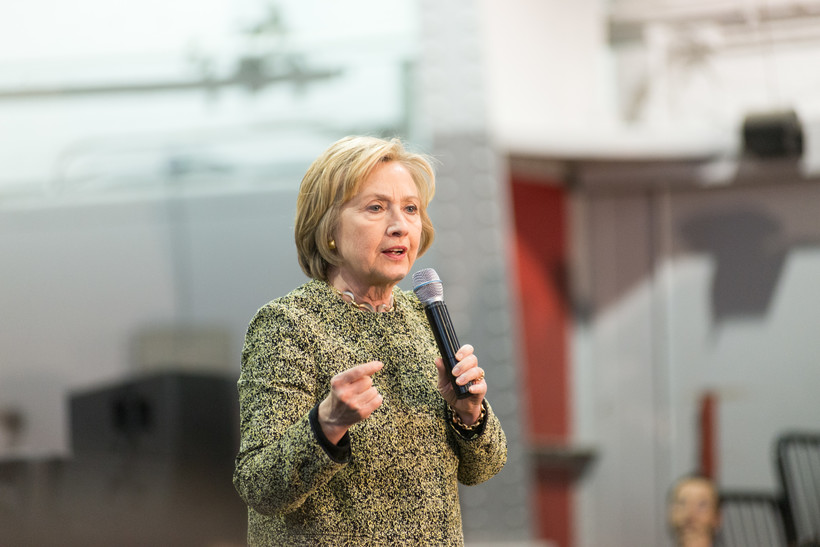 Is Gender Playing A Role In Perceptions Of Hillary Clinton's Health?

Professor: Donald Trump's Campaign Driving Narrative That Clinton Is Too Fragile To Be President
By Scottie Lee Meyers
Share:

A political professor says gender is likely playing a big role in the reaction to Hillary Clinton's bout with pneumonia that forced her to cancel campaign stops in California this week.

Questions about Clinton's health emerged after a video showed Secret Service agents helping her into a van on Sunday while departing early from the Sept. 11 memorial ceremony in New York City.

"It has to do a lot with gender and the way the Trump campaign has really been using these tropes of masculinity," said Jennifer Piscopo, a political professor at Occidental College in Los Angeles.

Piscopo pointed to some of Trump's more famous displays of masculinity, including the boasting on the size of his penis, the condescending treatment of women and his affinity for Russian President Vladimir Putin.

It's not just about overstating his manliness, said Piscopo. For months, Trump's Republican presidential campaign has been driving the narrative that Democratic opponent Clinton is too fragile and lacks the stamina to occupy the White House.

"A lot of that is really bound up in these very traditional ideas of masculinity, that a good leader is brash, he's braggadocio(us), he takes charge," Piscopo said. "So I also think painting Clinton as frail and unfit has this gendered element to it. It's very much about that you need a tough leader who is strong, who is the healthiest president ever to lead the country," mentality.

A top aide to Clinton Tweeted Monday morning that the campaign "could have done better" with the handling of the pneumonia diagnosis. But Piscopo said there wasn't a good option either way.

"I think if the campaign had come out in the beginning and had said she was ill, dialed back on her campaign events and perhaps didn't attend the Sept. 11 memorial, I think that would have played enormously badly for them," Piscopo said.

The failure to disclose Clinton's pneumonia only feeds into the narrative that the Democratic nominee has something to hide, Piscopo said, despite that a reasonable person might understand that a hot day, massive crowds and a grueling campaign schedule could tax someone's health.

"I think the challenge for the Clinton campaign has been that she never quite seems to benefit from those assumptions of reasonableness," Piscopo said. "There always is the assumption that there is something more nefarious going on."

In wake of the event, the Clinton campaign announced Monday that it will be releasing more medical information this week.

After praising his own health, Trump told FOX News on Monday morning that he hopes Clinton "gets well soon." In a later interview with CNBC, he said he was suspicious about the pneumonia diagnosis.

"It was interesting because they say pneumonia on Friday but she was coughing very, very badly a week ago and even before that, this wasn't the first time. It's very interesting to see what's going on," Trump told CNBC.