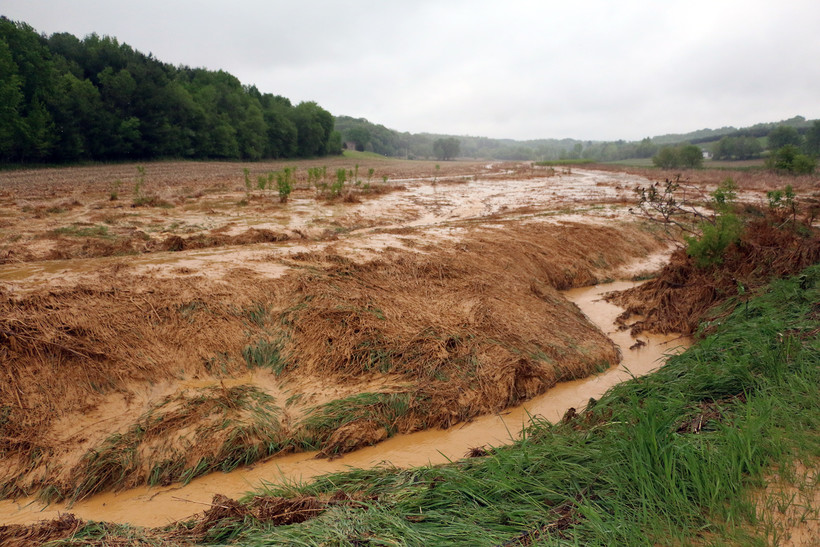 A Trempealeau County field is covered in orange mud after a frac sand processing pond was breached to save a worker.

Only Minor Injuries Reported But Questions Remain About Environmental Impact Of Spill
By Rich Kremer
Share:

Officials and farmers in Trempealeau County are left with questions and a lot of orange mud after employees at a frac sand mine had to release water used to process sand in order to save a worker who drove a bulldozer into an industrial holding pond Monday.

First responders were called just before 8 a.m. Monday to Hi-Crush Proppant’s frac sand wash plant in the city of Whitehall to rescue a man trapped inside a submerged bulldozer in a pond on the property according to a press release from the Trempealeau County Sheriff’s Department. The pond holds what is called process water, which is used to separate sand grains from mud and other fine silt holding the sandstone together. In order to rescue the operator, a decision was made to breach a retaining wall of the pond and drain it. The man was uninjured but some firefighters were treated at a local hospital for minor injuries.

When the pond’s bank was breached the orange colored water rushed through a valley along Poker Coulee Road, between the Hi-Crush mine and wash plant and the company’s sand drying facility. By Monday afternoon farm fields along the roadway were covered in a wide trail of orange sludge. The sediment spill also made it to the Trempealeau River and a nearby creek, turning both bright orange as well.

An initial statement from Hi-Crush Proppants applauded the efforts of first responders in rescuing the trapped employee. In a followup comment to WPR, a company official said they are gathering data about the extent and content of the spill and are "committed to the health and safety of the citizens (including our employees) and the protection of the environment. We will continue to do the right thing."

But questions remain over what was in the water and sludge now covering portions of the valley and flowing into local waterways. Frac sand mines typically use a chemical known as polyacrylamide to facilitate the separation of the fine sediment from the valuable sand. It’s considered non-toxic but does contain trace amounts of acrylamide, which is a neurotoxin, leftover from the manufacturing process.

The Trempealeau County Land Management Department reports that it has taken samples of the water and fine sediment and has sent them to a state laboratory in Madison.

Neighbors who use the land for farming aren’t sure what to do next. Bill Sylla raises chickens a few miles down the road but grows corn on the land that is now partially covered in orange mud.

Sylla says he’s already paid rent for the land and has purchased seed and is wondering who will pay for the damage.

"Somebody should be held accountable for what happened," said Sylla. "For one, somebody shouldn’t have ended up in the pond with a dozer and almost lost his life. That shouldn’t happen. And two, they shouldn’t flood the valleys. Yeah, they had to get him out and yeah, good thing they did. But there should be measures."

"We’ve heard a lot about how the mining companies could engineer solutions to any possible disasters or any possible outcomes and all this proves is there’s no way to engineer a solution that will prevent a human error," said Zeglin.

He said he’s thankful no one was killed and that first responders only suffered minor injuries but he said this story is not over.

"We have a great deal of destruction here and someone has to be held accountable," said Zeglin.

A press release from the state Department of Natural Resources said the the agency is investigating the situation.

"Cleanup of the sediment is ongoing and Wisconsin Department of Natural Resources staff continue to monitor the water quality of the tributary and the Trempealeau River," the statement said.