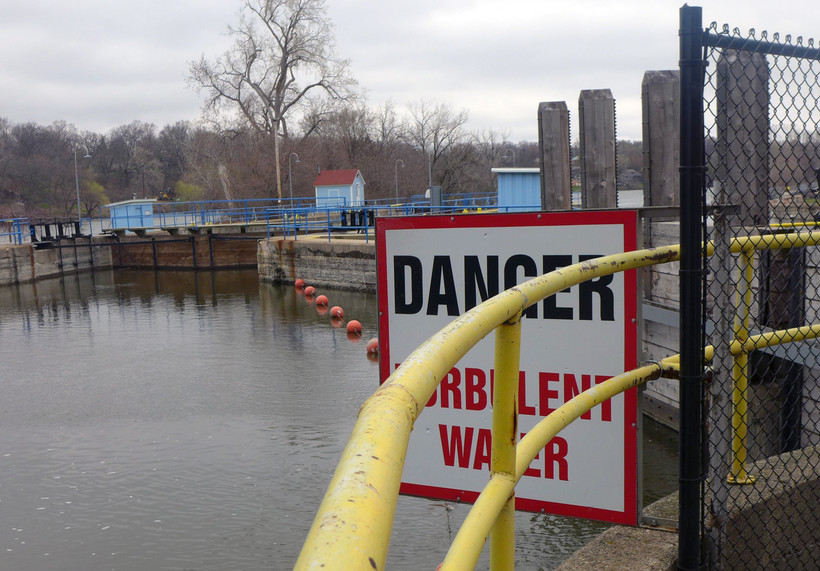 The Appleton Lock, north of where the Fox River's navigation authority hopes to install an electric fish barrier. Patty Murray/WPR

The Fox River System Navigational Authority is seeking approval from the state’s Department of Natural Resources to install an electric barrier at a lock on the Fox River in Menasha. If approved, it would be the first in Wisconsin.

The authority is asking to put the device in to keep out the invasive round goby. The small, bottom-feeding fish is native to Eastern Europe but is now in the Great Lakes.

The fear is that the fish could migrate from Wisconsin’s Fox River into Lake Winnebago and the Wolf River watershed.

The Menasha lock connects the Fox to Winnebago and was closed to boaters in 2015 to stop the goby's progression.

The authority's CEO, Jeremy Cords, said the electric barrier would allow boaters access to waterways and keep the fish out of Lake Winnebago and the Wolf River watershed.

The device pulses direct current into the water and forces fish to turn back instead of going through. Since gobies are bottom-feeders, the system would not affect native fish that swim in shallower water, according to the FRSNA.

Cords said the barriers are effective in foreign countries and across the United States, "basically all the way around us, Minnesota, Michigan, Iowa, Illinois, they all have multiple barriers. Wisconsin does not have any. This will be the first barrier in the state."

The project needs DNR approval. The navigational authority would pay the estimated $2.5million to $3 million cost.