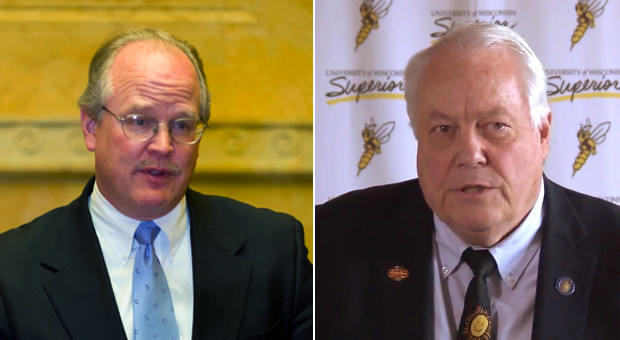 Walker’s $68 billion executive budget proposal contains cuts to public education and a $300 million cut to the University of Wisconsin System. It also includes a slight reduction in property taxes.

Schultz, a Republican who represented a southwestern Wisconsin district until his retirement this year, said that public education will drastically suffer as a result of the budget and that the property tax cut shows Walker’s priorities are skewed.

“It makes a great talking point for a presidential candidate. But, what does it do for the people of Wisconsin?” asked Schultz.

The budget also included changes to “The Wisconsin Idea,” which the Walker administration later said were a “drafting error.” Jauch, a northern Wisconsin Democrat who also retired this year, had sharp words for the governor for having revised the University of Wisconsin’s mission statement.

“It’s no wonder that Walker wanted to strike the language ‘search for the truth,’ because he can’t tell the truth himself,” he said.

Jauch said he thinks Walker wants to rewrite the progressive legacy of the UW according to his own ideology.

“The budget isn’t written for Wisconsin’s future because it completely disregards Wisconsin’s past,” said Jauch.

Schultz noted that the UW was created as a land grant institution in order to educate the workforce and ensure economic well-being of its citizens.

“To suggest that somehow people of the university didn’t understand their role belies the efforts of the university to cooperate with the Legislature and the governor’s office,” said Schultz. “And it sickens me, because this is a sophomoric sideshow that is just incredibly hurtful and not productive. We need common sense. We need learned, reasonable solutions.”

Jauch defended the Wisconsin Idea as a way for the state to help rural areas of the state, including 4-H students and farmers suffering from drought.

“It is the UW-Extension staff who are there to help them protect their investments,” said Jauch. “The Wisconsin Idea is practiced each and every day to improve the quality of life and Walker is beginning to destroy it.”