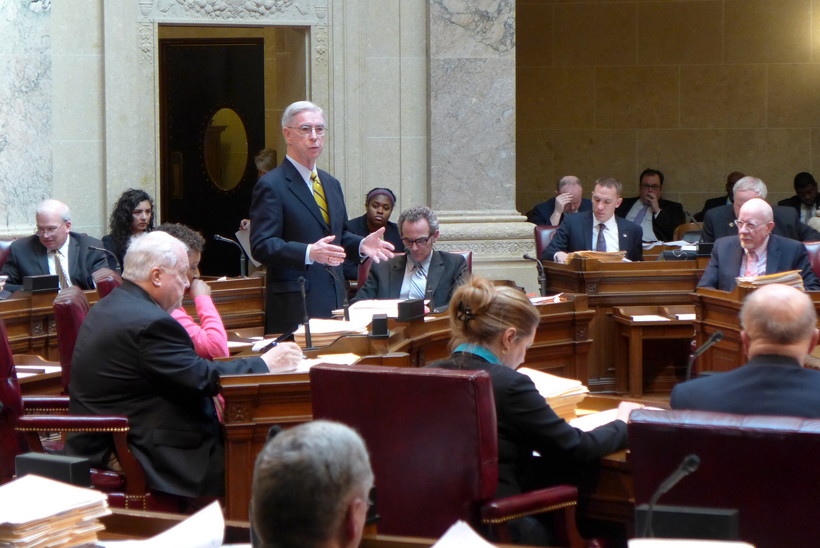 Former state Sen. Tim Cullen speaking on the floor of the Wisconsin Senate in 2014.

Former Democratic state Sen. Tim Cullen of Janesville is considering running for governor in 2018, saying the people of Wisconsin want a "uniter" to lead the state and his record shows he could be that person.

"I think the people of Wisconsin — Democratic primary voters and others — are tired of this war, they’re tired of the anger," Cullen said, whose interest in the race was first reported by WisPolitics. "I think they want this right-wing lurch to stop."

Cullen considered running for governor during the recall election of 2012, but ultimately decided against it. This race is different because it’s still more than two years away, he said.

"That was going to be a very short campaign and you were going to have to have a lot of money," Cullen said. "What’s different now is that there is the time."

Cullen was one of the 14 state senators who left Wisconsin in 2011 to temporarily prevent a vote on Gov. Scott Walker’s landmark collective bargaining bill. He angered some Democrats when he sat down with representatives from Walker’s office to try to reach a compromise and end the impasse.

That was during Cullen's second stint in the state Senate. He was first elected in 1974 and served as the Senate’s Democratic Majority Leader from the early to mid-1980s. Cullen left the Senate to serve as former Gov. Tommy Thompson’s Department of Health Services secretary before becoming an executive with Blue Cross/Blue Shield.

"I think the cumulative weight of everything he’s done is piled so high on him that I think the voters have figured him out," Cullen said, noting Walker’s 39 percent approval rating in the most recent Marquette University Law School Survey.

While Walker has sent signals that he’ll seek a third term as governor, Cullen said his decision won’t hinge on whether he remains in the race.

"The strong likelihood is that we would just get a Scott Walker clone if he didn’t run," Cullen said. "So nothing changes in terms of desire to get this state reunified."

Cullen will take the rest of the year to consider whether to run. He’s currently touring the state to discuss his recent book, "Ringside Seat: Wisconsin Politics, the 1970s to Scott Walker."

Several other Democrats have been rumored as possible candidates for governor including state Sen. Kathleen Vinehout of Alma and Dane County Executive Joe Parisi.