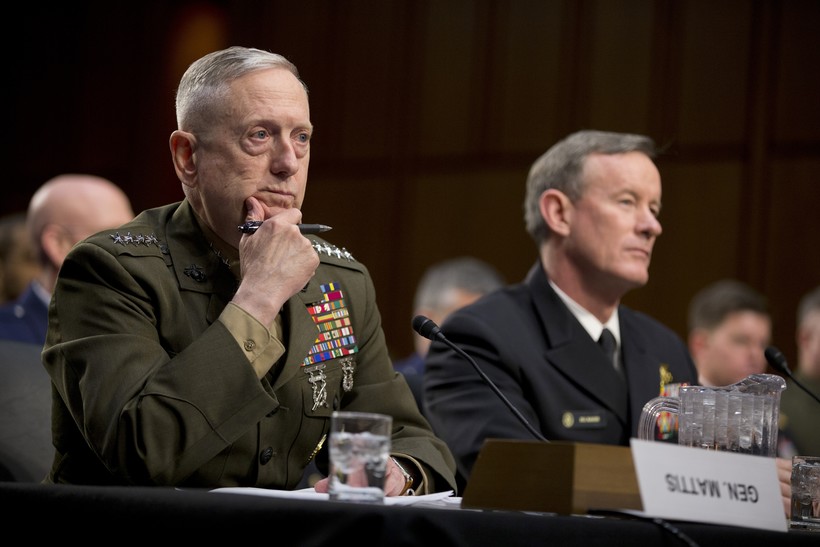 Trump's Nomination Has Led To Concerns About Civilian Control Of Military
By Scottie Lee Meyers
Share:

Michelle Litjens, a former Republican state assemblywoman from Oshkosh who has a son in the military, says she's encouraged by president-elect Donald Trump's pick of a recently retired Marine Corps general to head the Pentagon, despite concerns it would violate a law barring recent military personnel from the post.

During a Thursday rally in Cincinnati, Trump announced he has chosen retired Gen. James Mattis to serve as his secretary of defense, a position that is second in command behind the president in the control over the Department of Defense forces, which include the Army, Marine Corps, Navy and Air Force.

Pentagon correspondents describe Mattis as being a kind of living legend within the Marine Corps for his tough but thoughtful approach to leadership, qualities that have given him the nicknames of both "mad dog" and "warrior monk."

He led Marines into Iraq in 2003 and relieved an officer for not being aggressive enough, an unprecedented move, according to NPR's Tom Bowman. Mattis is also said to be a prolific reader with a personal library of thousands of books on military history.

There is a major roadblock that could complicate Mattis' confirmation. In order to ensure civilian control of the military, federal law stipulates the secretary of defense must not be active in the armed forces in the previous seven years. Mattis was active in the military less than four years ago.

Congress will have to pass a waiver in order to confirm Mattis, which was done once before in 1950 for George Marshall. Still, lawmakers at the time made a point of saying it shouldn't set a precedent.

Litjens said she understands the concern over civilian control but argued Mattis deserves to be another exception to the rule.

"We certainly don't want to be a country that's run by the military," she said. "But I think we have enough people in leadership positions ... that we don't have to worry that we're going down too far down the military road."

Tony Palmeri, a communications professor at the University of Wisconsin-Oshkosh and a media columnist for the Fox Valley SCENE, said he finds the appointment contradictory to what Trump promised on the campaign trail, a pattern that's continued with other cabinet appointments.

"I mean (Trump) told everyone that he thought that we needed to return to torture. In fact, he thought that the torture of waterboarding was not severe enough. But then apparently he had a conversation with Mattis who convinced him that torture doesn't work," Palmeri said.

Additionally, Mattis was a strong and vocal supporter of the Iraq War, said Palmeri. Trump, on the other hand, has insisted it was a disaster.

"So on those two issues, torture and Iraq, it looks like he's now appointing a defense secretary who is completely opposite of that. And it just seems to be a pattern with Mr. Trump, that it's a campaign on one set of ideas, and then something else happens when he gets into power," Palmeri said.

In the end, both Litjens and Palmeri expect Mattis to be confirmed by Congress given that the retired general does have the respect and trust from politicians on both side of the aisle. However, they both anticipate a vigorous confirmation hearing.