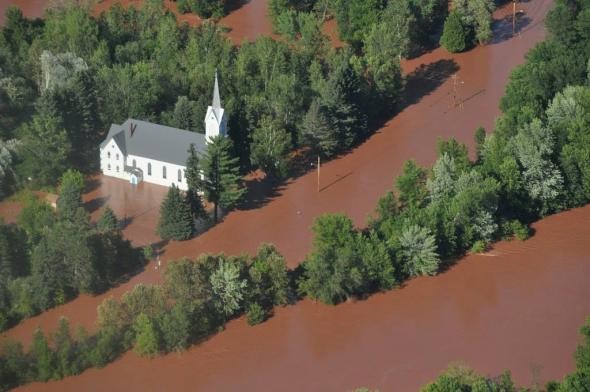 Former Lawmaker Weighs In On Flooding In Northern Wisconsin

Northern Wisconsin continues to pick up the pieces after heavy rain and flooding hit the region last week. The storm left damaged homes and businesses, flooded roadways and three dead.

In his 32 years in the Wisconsin state Legislature, former state Sen. Bob Jauch, D-Poplar, has seen many disasters, but never one with as much water damage spread across a region, he said. Jauch traveled through the area over the weekend.

"Almost every town road, county road and state highway is closed, washed out. The water has receded, but you can tell from the water marks on the trees just how high the Bad River got, and how difficult it was for families who were virtually isolated in this storm," Jauch said.

More than $30 million in damage has been reported and more than $28.8 million from damage to public infrastructure, according to the Wisconsin Emergency Operations Center.

Over 150 businesses and homes have experienced varying degrees of flooding and some have been displaced from their homes, Jauch said. The flooding has also affected commerce and commercial traffic.

The Bad River Band of Lake Superior Chippewa advised members to drink bottled water or boil drinking water due to the flooding on the reservation.

The most critical step upon completion of the damage assessment is for Gov. Scott Walker to declare it a disaster area and submit an application for a FEMA declaration, Jauch said. Jauch said he expects that to happen sometime this week.

Walker has asked for a damage assessment by FEMA, scheduled to start July 25. The governor declared a state of emergency for eight northern Wisconsin counties last week.

It's been "extraordinary" to see how people are helping each other, as well as the government stepping in, Jauch said.

"That's government at it's best, in times of emergency, because federal, state declarations will match the humanity shown by residents who have demonstrated so much compassion and care and resiliency for their neighbors and federal citizens."

It's time for public officials to invest resources in the disaster assistance program, which is underfunded, according to Jauch. It's "essential" that officials take a closer look at housing assistance and should look to Minnesota, which has a better system to help those affected by floods, he said.

"Oftentimes, insurance doesn't cover that damage and we need to help them rebuild their lives and get back into their communities," Jauch said.