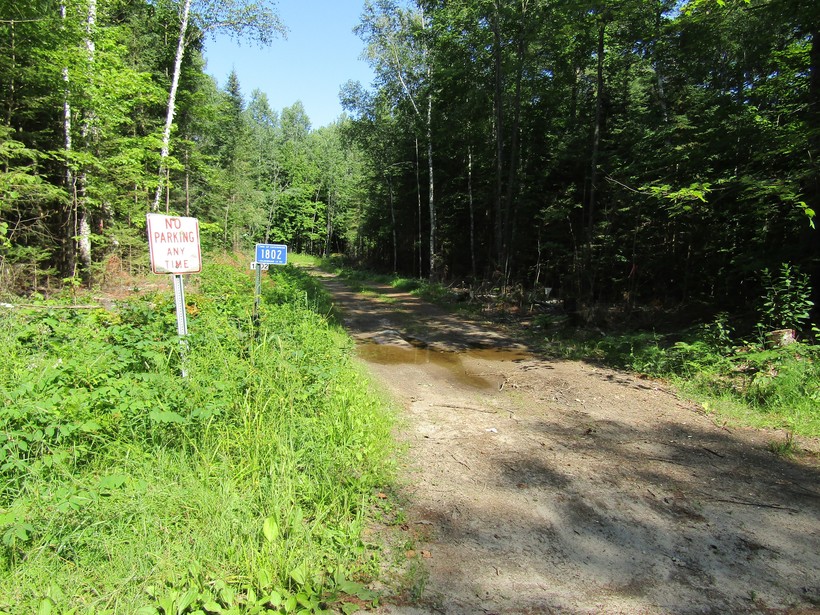 Tom Spellman found out about the 40-acre parcel of land for sale over a card game.

Spellman came from Tomahawk; the land was near Rhinelander, on Hildebrand Lake Drive in the town of Enterprise. According to Spellman’s son-in-law, Bill Strom, it was more than 60 years ago that Spellman bought the property for something like $5,000.

Spellman died in 2001. It was always his intention, Strom said, to pass it down from generation to generation of his family. It became Strom’s intention, too.

It didn’t work out that way. The land would become a wedge between Strom’s wife and her siblings. Today it is owned by Oneida County Forestry Director John Bilogan, and it’s at the root of public corruption charges recommended against Bilogan after an Oneida County Sheriff’s investigation found Bilogan used intimidation and made threats against the Stroms to induce them to sell.

Speaking publicly about the case for the first time, Strom told WPR he believes he was "swindled" out of his property. If the district attorney does bring charges against Bilogan in relation to the parcel, Strom hopes he might be granted the opportunity to buy it back.

The parcel of land owned in turn by Spellman, Strom and Bilogan is surrounded by county forest on three sides, and Hildebrand Lake on the fourth. There is no public access to the land. A narrow, unlined town road runs north of the lake, past homes that have a view of tree-lined water from their backyards. At the road’s dead end there is an ATV trailhead. Beyond the dead end it’s a logging road, with furrows in the ground for tires but no pavement, no electricity, no sewer access.

Strom, a carpenter who lives in suburban Chicago, used to spend time there with his father-in-law. He helped build a cabin and a shed on the property. After Strom and his wife Vickie had kids, he would bring his two sons there. For nearly 35 years, it was a refuge and a vacation for him several times a year.

"My enjoyment was just getting out where there were no telephones," Strom said. "We didn’t have electricity in the cabin. It was just sort of kicking back."

The story of how Bilogan came to own the land involves tangled family relationships and financial struggles, a foreclosure and a lawsuit. It has become public as a result of an investigation of the Oneida County Sheriff’s Office, which found that Bilogan used county equipment and labor from prison inmates to clear a private road on the property. According to the sheriff’s report, Bilogan at one point told Strom he would "make things rough" for his family if the Stroms didn’t sell, and even threatened to use eminent domain to seize the property from them. 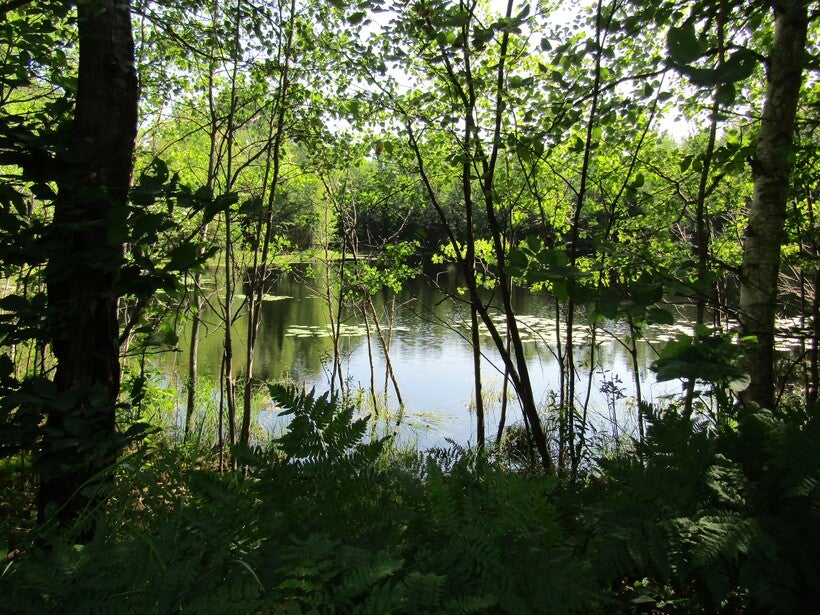 A small pond can be seen through the trees south of Hildebrand Lake Drive in Oneida County. Rob Mentzer/WPR

Today, Bilogan awaits word from prosecutors on possible charges. Strom is waiting, too, still angry about the way he was treated by Bilogan. He feels he was manipulated and strong-armed out of something precious to him and his family.

Vickie Strom, born Victoria Spellman, referred questions on the case to her husband. In a brief conversation, she referred to Bilogan as having "stolen" the Hildebrand Lake land. She has two siblings, Thomas Spellman and Lynda, whose married last name is Stape. Both moved away from the Midwest — Thomas Spellman to Las Vegas, Stape to Florida — and felt little if any connection to the northern Wisconsin land their father owned.

When their father died, the property was deeded to their mother, and she in turn gave ownership to her three children equally.

Bilogan would use that to his advantage, in the process pitting the siblings against each other, according to Bill Strom and the sheriff’s report.

The property was not for sale, but Bilogan learned about it and, through his wife, approached Strom about buying it.

"I indicated I had no interest in selling the property," Strom said. "It was my father-in-law’s wish that it be passed on from generation to generation, and that was what I was attempting to do. So there would be no need to pursue anything further." 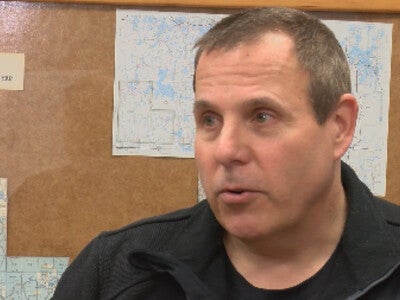 The Stapes sold their interest, too, making Bilogan majority owner of the property. Then Bilogan turned back to Strom.

"I said, 'I don’t really give a flying blank what you want to do with it, John, I’m not selling my interest,'" Strom said.

So Bilogan turned to legal actions. His lawyer sent a letter demanding that Bilogan be allowed access to the cabin and the shed on the property. He sued Vickie Strom for it.

Lynda Stape and Thomas Spellman did not respond to messages seeking comment. Records from the sheriff's investigation confirm details of the account, and public records from Clark County, Nevada, show that Spellman had multiple liens and mortgage defaults against him from 2008 through 2013.

WPR made multiple attempts to reach Bilogan by phone and email, including to an email address associated with Brandelwood LLC. He did not respond.

To Strom, it’s obvious that Bilogan was never going to stop at two-thirds ownership of the property. He said he and his wife are upset with the way her siblings handled the sale — had they offered the Stroms a chance, he said, perhaps they could have bought out their share of the land.

But Strom is especially angry at Bilogan.

Bilogan had, "heard there were family problems, issues among the siblings where they really weren’t communicating," Strom said. "He used that to his advantage."

But legal bills were piling up. Bilogan was already the majority owner. As much as he hated selling to Bilogan, Strom hated the idea of being partners with him just as much.

"He was a guy that was playing the system," Strom said. "He knew the ropes and he knew that he had my wife up against the ropes. And I despised every bit of that."

Maneuvers By Bilogan To Gain Access To Land Attracted Controversy

Even before the sheriff's investigation, Bilogan’s purchase of the parcel stirred controversy. In August 2018, he proposed a land swap with the county that would have allowed him to make changes to the cabin, and which would have rerouted the nearby ATV trail. A legal opinion by Oneida County Corporation Counsel Brian Desmond said the proposal "would not be clearly illegal" but that it "does not pass what many people refer to as 'the smell test' with regards to benefiting a county employee in a way that another member of the public would not be treated."

The opinion was sharply critical of Bilogan, saying it appeared that he had been using county time and his position to try to gain access to his private land. Desmond declined to comment.

The legal opinion also noted that the estimated fair market value of the land was $150,600, but that Bilogan purchased it for only $109,500. Desmond wrote that he suspected the lack of public access was one reason for the low purchase price.

An August 2018 report in the Lakeland Times on a "sometimes heated" debate at a county forestry meeting showed disagreements among officials in part about whether it was appropriate to grant public access to the property now that it was owned by the forestry director, after similar requests had been denied in the decades before Bilogan became owner. The story quoted Bilogan telling a county board member, after the meeting adjourned, "I banked the ranch on this."

Enterprise Town Chairman Leonard "Tiger" Guth III told WPR he had no interactions with Strom or the elder Spellman and that he didn’t know the particulars of Bilogan’s purchase of the land. He was in favor of Bilogan’s plans for the property, saying that they would increase its value and therefore the tax base in Enterprise.

"And I feel that he’s getting a raw deal by some other county officials," Guth said, "mainly the (Sheriff’s Department) officers that did the investigation, because their questions were accusatory rather than looking for information."

"If he was a developer and wanted to do some kind of development, he could have acted on that property and it would have been a lot bigger development," Guth said. "Instead, he looked out for the best interests of the county."

Multiple sources in the sheriff’s investigation accused Bilogan of using public resources for his private good. The investigation into his conduct was first launched when he directed a work crew of prisoners from McNaughton Correctional Institution to help clear the logging road on his private land. Bilogan also called in county equipment and a county worker to help complete the work.

Strom said the case has taken a toll on him, and that frayed family relationships remain far from repaired. And in the end, he misses the place.

"Especially bringing my boys up there," he said. "They were the best times of my life."