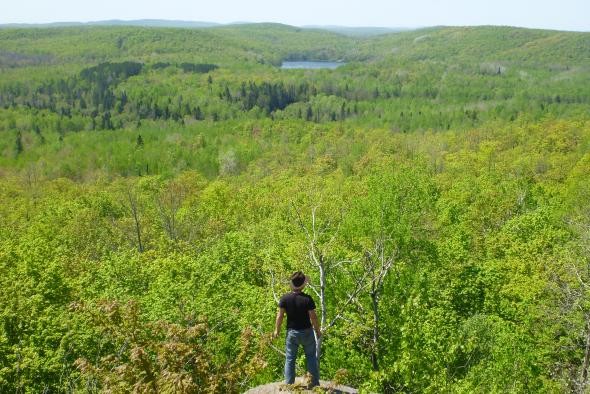 View from Corrigan's Lookout near the Penokee Range.

The former president of a mining company that once planned to build a $1.5 billion iron ore mine in northern Wisconsin is being fined for polluting an aquifer near a mine in Spain.

Bill Williams, Gogebic Taconite's former president, and two other executives are being fined more than $300,000 for their role in the company's Cobre Las Cruces mine near Seville, Spain. A Spanish court found the three guilty of water contamination and illegally taking water from a Seville aquifer meant strictly for the city's residents in case of an emergency, according to Spanish court documents and a previous WPR report.

Court documents allege the company changed the system it was approved to use for extracting and injecting water into the aquifer and began using a new model without authorization. The case was settled on Sept. 12. Williams denies any wrongdoing.

"We did not consume the water," Williams said. "We did not pump arsenic into the water. There was word that the dry stack tailings leaked the arsenic into it. The plant wasn't even built at that time, so there was no tailings to be leaking into it."

Williams had previously pointed to the Cobre Las Cruces mine's dry stack tailing technology as a method that could be used for the proposed GTAC iron mine in Ashland and Iron counties in the Penokee Mountain Range.

The Spanish environmental coalition Ecologists in Action had raised concerns the mining company Cobre Las Cruces allowed arsenic to get into the aquifer. The coalition had been monitoring mines, including Cobre Las Cruces, and their respective pollution levels for 13 years.

Antonio Ramos, a coalition member, spoke Wednesday to WPR through translator Natalie Pate about the case's outcome. He said it's the first time an international mining company is being held accountable in Spain.

"He said they've been declared guilty that they committed a crime, and he's satisfied," Pate translated.

Company lawyers reached a plea bargain in the case, and Cobre Las Cruces will pay the fines, Williams said.

"We said we did pollute the aquifer to what their claims were, basically to stop it and reduce our lawyer fees," Williams said. "The sentencing at that point was a year and three months (of) jail time, suspended."

In addition to fines, Williams can't work as a mining engineer in the European Union for one year.

"As far as I'm concerned, it's pretty much over," Williams said. "I'm not happy with it. I don’t accept it, but I agree with what they've done. I agree that it was a plea bargain with the lawyers to prevent further legal costs."

Williams said there are no restrictions on his ability to work as a mining engineer outside of the E.U. He's not currently employed in the mining sector, but said he would like to get back into it.

Ramos said he’s content with the court’s decision to suspend jail time because mining companies have done whatever they want up to this point in Spain. He hoped the decision was a sign that the mining sector would be held accountable for pollution on an international scale, citing a recent lawsuit and examination of companies accused of environmental contamination in Brazil and Mexico.