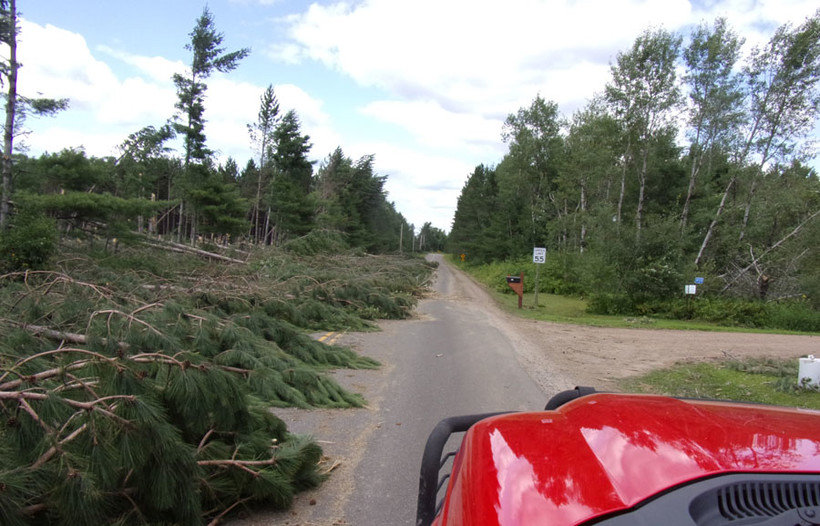 The Wisconsin Department of Natural Resources reports around 81,000 acres of forest across all ownership types was damaged in Langlade County as seen above. Photo courtesy of Wisconsin DNR

After severe storms last July, efforts are ongoing to clean up damage to forests across northern and central Wisconsin. Some foresters are concerned that a glut of wood on the market and winter weather may hamper efforts to remove damaged timber.

More than 286,000 acres spanning seven counties, including Langlade, Oconto and Barron counties, were damaged by storms that produced straight-line winds and tornadoes last summer, according to the Wisconsin Department of Natural Resources. The damage was spread across county, state, national and private forest land with private lands accounting for nearly half the damage, according to figures provided by Ryan Severson, the agency’s northeast district forestry leader.

Severson said the cleanup has faced several challenges, including market and weather conditions.

"The market can only take so much wood at a time. Some of it’s access," said Severson. "We've had an incredibly wet year and our early start to winter and heavy snow cover has limited our ability to drive frost into the ground and freeze down some of our wetter sites."

Langlade County experienced some of the worst effects of last summer’s storms with around 81,000 acres of forest land across a mix of ownership that was damaged, according to the DNR.

Erik Rantala, the county’s forestry administrator, said the county has at least 70 salvage sales that have been awarded spanning more than 8,000 acres of timber. Rantala said the acreage amounts to two-and-a-half years of timber that they would have set up for sale.

"We're still setting stuff up and selling. Certainly through 2020, we’ll be very busy or timber sales will be very busy on the county forest," said Rantala. "(It will) primarily be salvage sales — getting these things cleaned up."

The county has typically brought in more than $2 million in revenues from timber sales in recent years. Rantala said he expects to see an initial spike in revenues due to the volume of wood damaged in the storms despite a decline in prices with a glut of wood on the market. Yet, it’s raising concerns for future years when that timber and revenue may not be there.

"The deeper the snow gets — this stuff is just laying on the ground and it’s buried in the snow," he said. "Trying to make sure you get everything and utilize it as much as you can, it's difficult. These machines are pulling stuff out of the snow. It’s hard on equipment. It’s just much slower going." 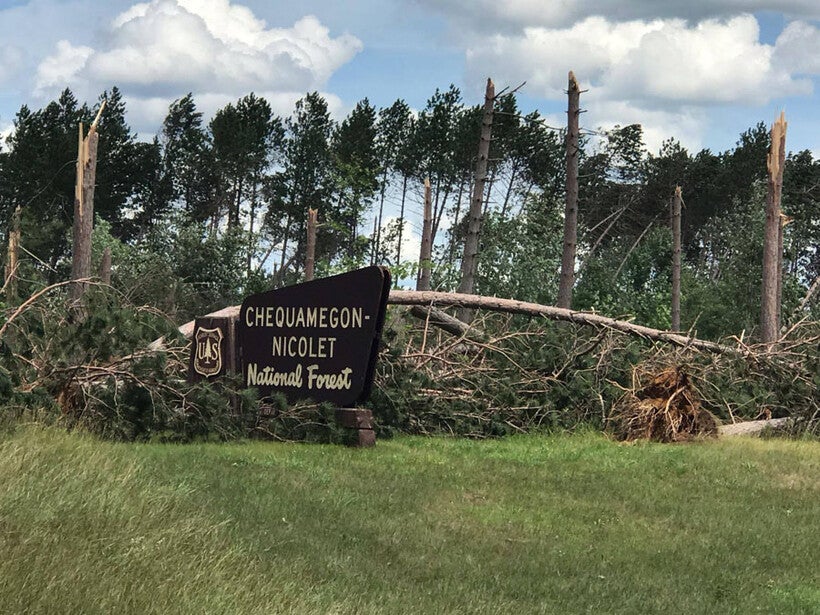 Rebekah Luedtke, executive director of the Wisconsin County Forests Association, said an extremely wet fall might have prevented the ground from freezing in time before snow fell, further insulating the ground. She said that makes it difficult for loggers and equipment to access roads and timber stands without doing any damage.

"We're still hopefully in January, February, March, that we'll see some colder conditions that will allow that stuff to continue," she said.

She added that many wood yards are already full due to the amount of wood already salvaged from the storms. Luedtke said they’re typically empty going into the winter months.

"Time will tell to see how fast mills and other folks can use that product," she said. "It could make it a little bit harder this winter to move wood just because so much wood has been harvested over the last few months due to salvage stuff."

The amount of storm-damaged wood that remains in the forest is cause for significant concern of increased risk for fires next spring, said the DNR’s Severson.

"Certainly, we'll be implementing measures to help mitigate those concerns," he said.

Those measures include burning restrictions and the success of timber salvage operations currently underway.

The Chequamegon-Nicolet National Forest (CNNF) estimates more than 100,000 acres were affected by the storms, according to Casey Jardine, the forest's acting public affairs officer. She said the extent of the damage is still being assessed. The U.S. Forest Service has awarded 14 salvage sales spanning 2,308 acres.