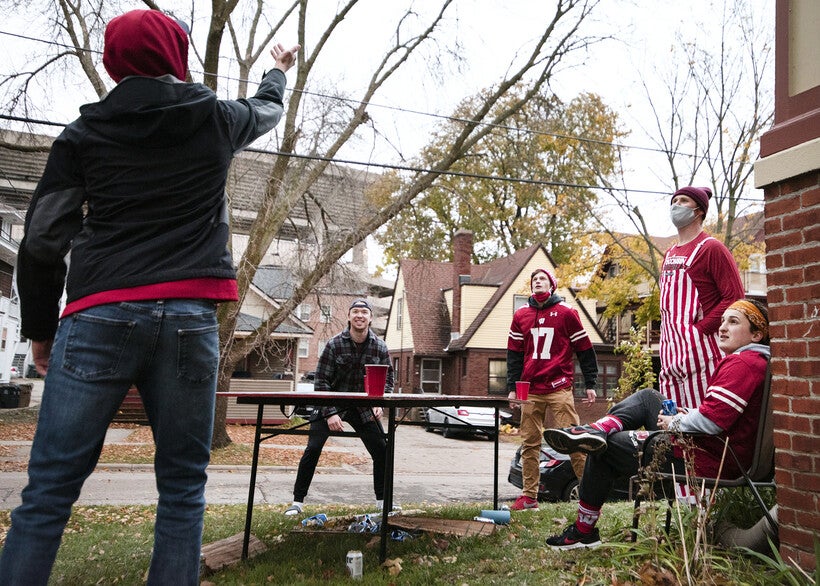 COVID-19 Has Isolated Students And Led To Mental Health Challenges, But Students Find Ways To Connect
By Rich Kremer
Share:

University of Wisconsin System campuses are wrapping up their first full semester amid the COVID-19 pandemic. It's been anything but normal, and for some first-year students, finding a sense of community on campus has been hampered by heavy restrictions on social gatherings. Mental health experts say that isolation is a problem and has contributed to a myriad of anxieties faced by students.

Mackenzie Miner moved three hours from her hometown of Oconomowoc to the University of Wisconsin-Eau Claire in late August. At the time, she told WPR she wasn't worried about the university closing due to outbreaks of COVID-19.

"It's just gonna be weird as ... an education major, especially in music," said Miner in August. "But I don't know. You roll with the punches." 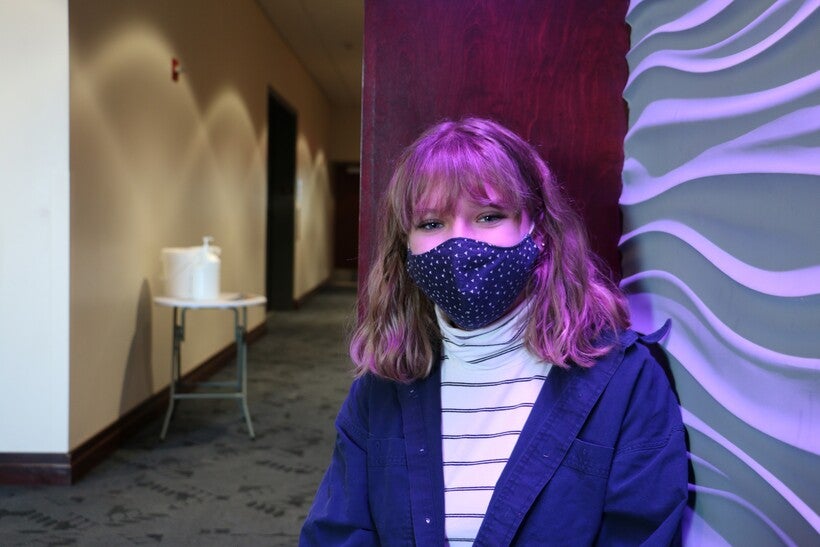 Mackenzie Miner moved to UW-Eau Claire in late August from her hometown of Oconomowoc. She said her first semester of college amid the COVID-19 pandemic has made it harder for her to connect with people on campus and do group activities with fellow Blugold Marching Band members. Rich Kremer/WPR

In late October, Miner spoke with WPR again while looking back at the beginning of her first semester in college. She said when she imagined what college would be like, she expected to find a sense of community and even family with fellow students. Instead, after an initial spike of students testing positive for COVID-19, Miner said she found herself leery of being in a dorm with hundreds of other students.

"So, I was like, 'Oh my God, I'm sharing a bathroom with, like, all these people where I literally don't know where they've been,'" said Miner. "That sounds awful, but it's weird."

With time, that anxiety faded. Miner said she got used to living in the dorms, as well as things like regular COVID-19 testing, wearing specially designed masks while playing clarinet in the campus marching band, and take-out meals from the campus dining center.

Miner hasn't tested positive for COVID-19 and said she appreciates the safety guidelines at UW-Eau Claire. But she also says there isn't much to do now, and a planned outing with fellow band members was canceled due to social restrictions. Miner said she hears what things used to be like from older members who came to campus before the pandemic hit.

"And they talk about it, like, 'Oh, we used to go do this when we could all be together and stuff like that,'" said Miner. "So there's that little taste of, that's what normal is supposed to feel like."

Before moving nearly four hours from Village of Elk Mound to a dorm at UW-Milwaukee, first-year Amanda Holzer talked with her mom about canceling her housing contract with the campus to stay home and take classes online. Ultimately, she decided it would be easier to take some of her environmental science classes in-person.

"But ... it was really intense knowing, just that going home even to visit, would be really hard," said Holzer. "Even now if I go home, I have to get a COVID test before I leave, and then I have to wear a mask just, like, to see my mom." 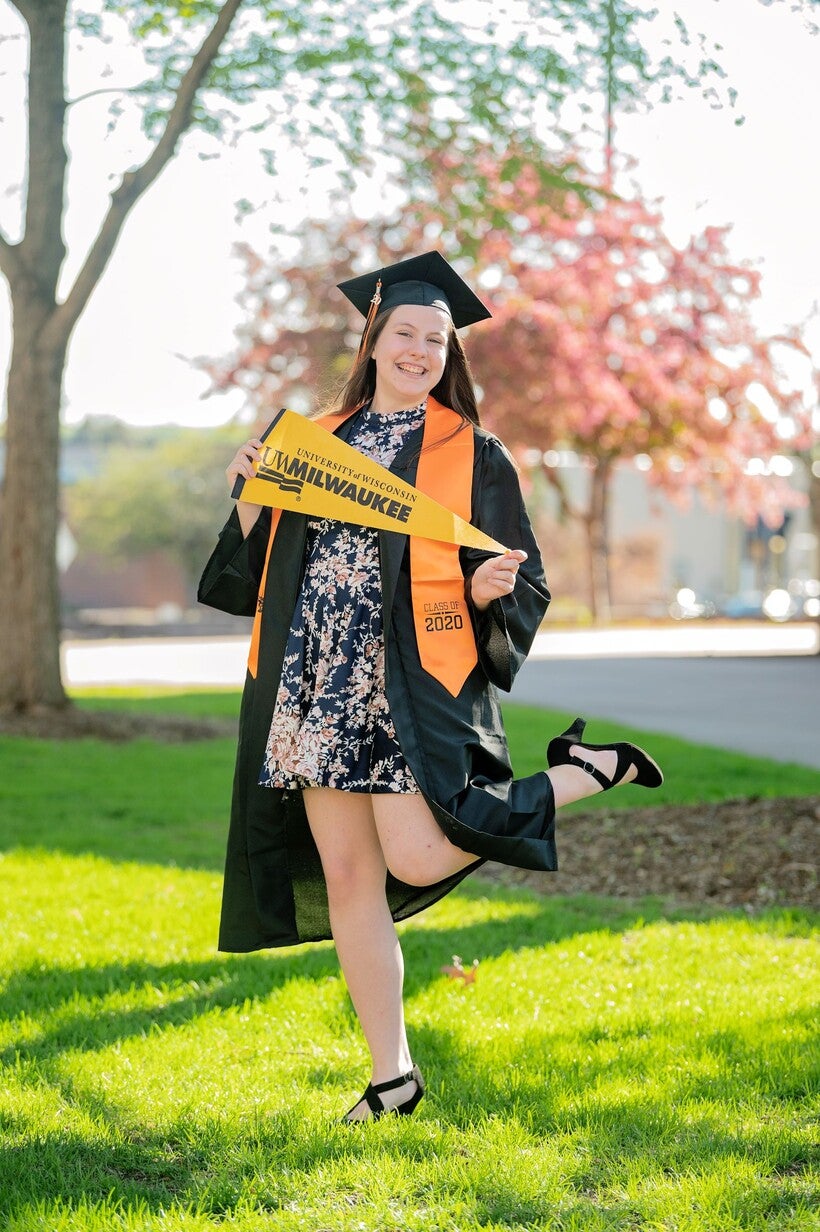 Amanda Holzer graduated from Elk Mound High School last summer with plans to attend UW-Milwaukee in the fall. But she said surges of COVID-19 infections in cities like Milwaukee led to long conversations with her mother about staying home and taking classes online. In the end, Holzer took the plunge and moved to the campus of 24,000 students. Photo courtesy Lissa Marsolek

Holzer said she doesn't mind that most of her classes are online because she likes being able to finish assignments on her own time. The downside is, in some classes with pre-recorded lectures, she's never seen her classmates. Holzer said she and the roommates that share a suite-style dorm with her take COVID-19 seriously. She said it feels weird when they hear music coming through the vents from a neighboring dorm without being able to say hello.

"That's ... the hardest part, just knowing that there is social activity happening and that we can't really go and participate in it safely," said Holzer.

Despite not being able to meet throngs of people on campus, Holzer said relationships with friends she has made are stronger than they otherwise might be. And with roommates, a sense of openness and accountability rule, she said, when it comes to things like COVID-19 test results.

At UW-Madison, the state's largest campus, first-year student Robyn George said before she enrolled a friend told her she would make friends at places like campus dining halls. But because of COVID-19, campus dining halls have encouraged take-out options to reduce gatherings.

George has met fellow students by joining extracurricular groups like the campus's Associated Students of Madison, though it only meets online.

"So, it's been kind of isolating," she said. "You definitely have to learn a new way to make friends in COVID times. I've been able to figure that out. I know other people haven't, and they end up going home. So that's kind of sad. But yeah, definitely something missing out on the social end."

The pandemic has also affected George's advocacy efforts on campus for racial equality.

She said she's shied away from organizing in-person protests and events, but students are still very engaged on social media and through groups like Associated Students of Madison and the UW-Madison Black, Indigenous and People of Color Coalition.

Despite multiple COVID-19 vaccines slated for approval as early as this month, campuses like UW-Madison aren't planning to abandon restrictions aimed at preventing outbreaks anytime soon. George's advice to the next crop of first-years this coming spring is to "get up every day, get dressed and go somewhere."

"I've had weeks where it's like school is stressful and you just want to stay inside, and it's just not a good mental health situation," George said. "So, making sure that you're still getting outside and making social interactions, get involved in extracurriculars, that's a good way to meet people." 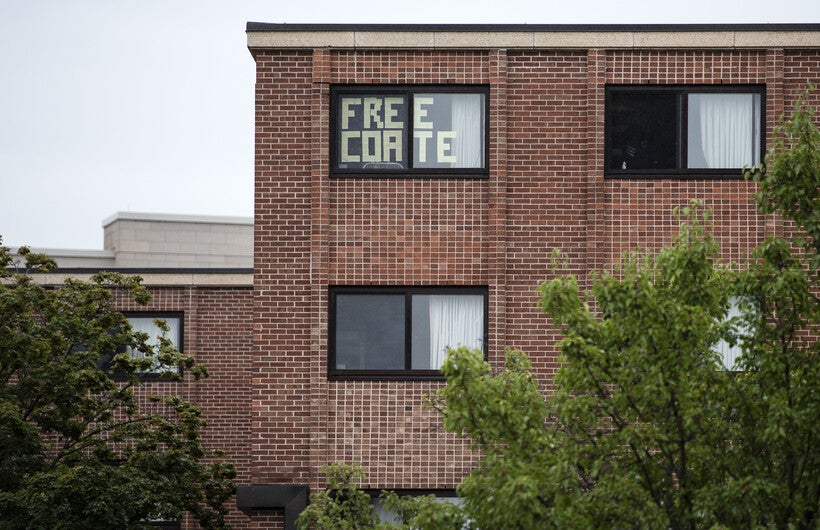 The message "Free Coate" is written on a Coate Hall window Friday, Sep. 11, 2020, at UW-La Crosse. The university issued a "shelter in place" order for students living in the residence hall. Angela Major/WPR

While the three first-years said they've been able to adapt to the added stresses and peculiarities of college live during a pandemic, many other students have struggled with the transition.

Farzan Sasangohar is the director of the Applied Cognitive Ergonomics Lab at Texas A&M University. This year, he and fellow researchers surveyed and interviewed more than 2,000 students about how the pandemic has impacted their mental health. Results showed 71 percent of survey respondents said their stress and anxiety levels increased due to the COVID-19 pandemic, while 44 percent reported symptoms of depression.

Sasangohar said during interviews with students, 86 percent said the pandemic has increased their sense of isolation.

"Over half of those said their interaction levels with friends has decreased," said Sasangohar. "And that's a major stressor. Because, you know, the school life, the college life ... is difficult and the only balancer there is the social factor."

At UW-Oshkosh, student Counseling Center Director Sandy Cox said students told her staff early in the pandemic that they felt "real loneliness," isolation and disconnection after campuses suddenly closed last spring. Students seem to have learned how to navigate those feelings, she said, by forging closer relationships with family and roommates.

Cox said counselors saw a transition this fall to more depressive symptoms as the pandemic "just keeps going on."

"And so, if somebody already had a tendency towards struggling with anxiety or depression, we were seeing that the pandemic was bringing an increase to that," Cox said. "But the uniqueness that we're seeing is we're seeing a lot of students who never experienced any of these symptoms in their life prior to this pandemic experience."

Cox said the UW-Oshkosh Counseling Center has always fielded crisis situations with students experiencing thoughts of suicide, loss or trauma, but the pandemic has accelerated that.

"So, basically, we're seeing a student almost every open hour who is really, really struggling," said Cox. "And so that's a definite change in which we've seen as the semester continues to progress."

Despite budget challenges at UW campuses across the state brought on by COVID-19, Cox said UW-Oshkosh was able to add a full-time crisis counselor. And while counseling is happening remotely, she said they've seen good engagement from students needing help. To help offer a sense of connection, said Cox, the center is offering more virtual group therapy sessions, which have been "packed."