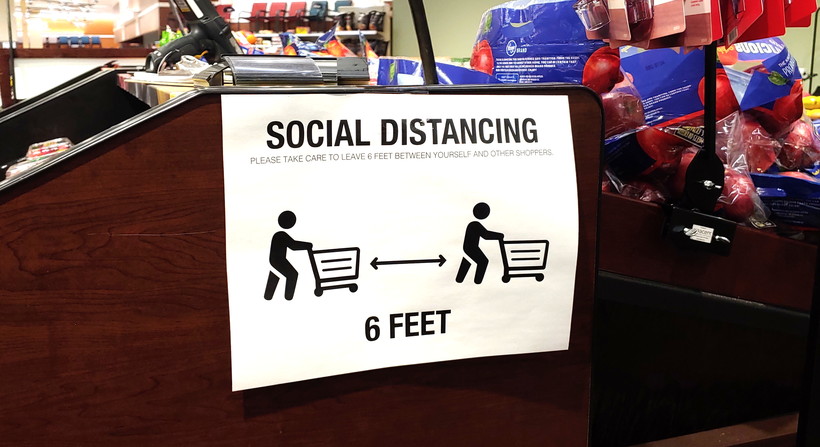 A sign at a store on Madison's northside recommends social distancing between shoppers. Steven Potter/WPR

For The First Time Ever, New Daily COVID-19 Cases Top 3,000 In Wisconsin

New reports of COVID-19 cases have once again hit a record high in Wisconsin, based on the latest data published by the state Department of Health Services.

DHS reported 3,132 new cases of the disease Thursday, bringing the average for the past seven days to 2,381 daily cases. Thursday's new case total is the highest that figure has been since the beginning of the pandemic.

17.1 percent of people who got tested for COVID-19 over the past week were positive for the disease, according to DHS. That rate has been holding steady around 17 percent for the past week.

According to DHS, there were 873 COVID-19 patients hospitalized as of Wednesday with 219 in the ICU. A total of 8,061 people have been hospitalized because of the disease, or 5.7 percent of all positive cases.

The latest figures bring the overall total of positive cases in Wisconsin to 141,830, according to DHS. A total of 1,424 people in Wisconsin have died from COVID-19.

According to DHS, The Fox Valley region was at 89.5 percent capacity in their intensive care unit beds as of Tuesday, and the Southeast region was at 90 percent. On Wednesday, DHS Secretary Andrea Palm said every region of the state has hospitals reporting a current or imminent staffing shortage.

Wisconsin's daily testing capacity — based on the availability of test supplies and adequate staffing — has grown from 120 available lab tests in early March to 42,234 as of Thursday. The number of actual people with new test results reported Thursday was 16,656.