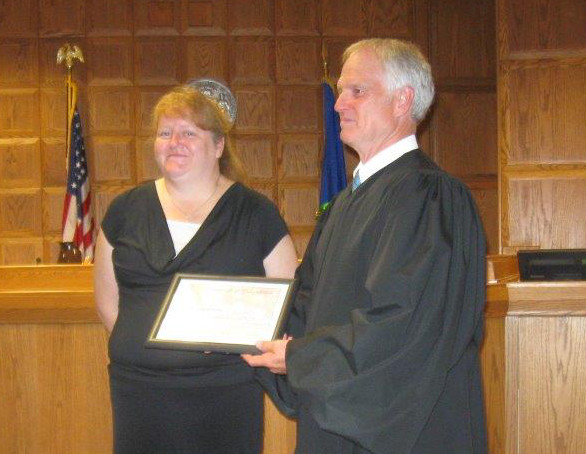 Outagamie County marked the graduation of the first participant in its Mental Health Diversion Court program.

The program is modeled on another court in Eau Claire County - Wisconsin's only other mental health court now in operation.

It's fair to say that Evelyn was at a low point last year when she walked into Outagamie County District court. "I had been released from prison and I had no family support," she says. "I had a dual diagnosis. I was addicted to alcohol and I had some mental health issues."

There are 15 other participants in the program. Eligibility is strict: Violent offenders need not apply.

Outagamie County Executive Tom Nelson says it's too early to tell how much money county taxpayers are saving. But he expects a savings for local and state taxpayers by keeping people out of jail or prison.

Nelson says it will be harder to quantify the human factor.

"Having a productive member of society working, holding down a job, supporting a family - that dollar figure in many respects is priceless," he says.

That's part of what the Mental Health Court helped Evelyn do. It connected her to programs she was eligible for but didn't know about. It also helped her find a job, a place to live, and get her driver's license back.

Those are things she says she wouldn't have been able to do on her own.

"I didn't care if I lived or died," she says. "I was at that point. I didn't see the light at the end of the tunnel and now I know I have a bright future."

The program requires its participants to make weekly court appearances at first. As they progress, those appearance happen every other week.