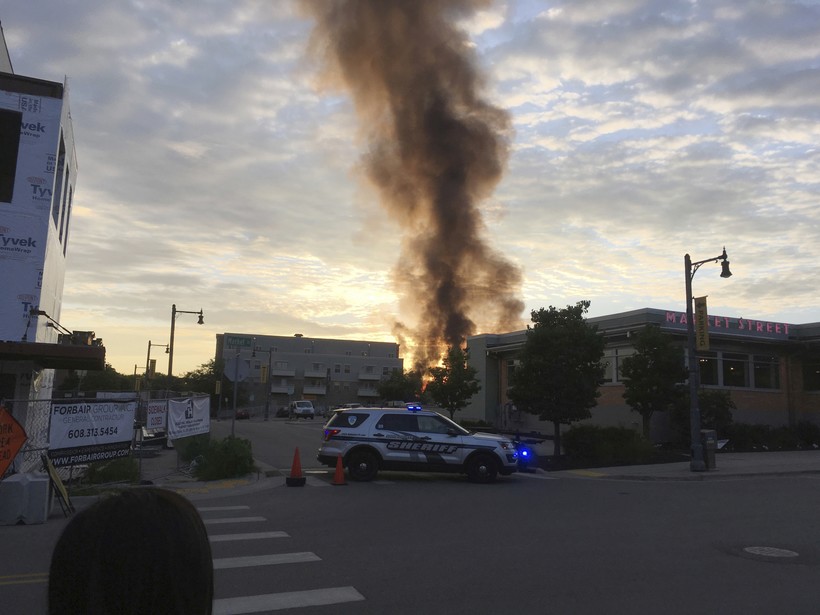 Firefighters responded to a report of a ruptured gas line around 6:20 p.m. Tuesday, about 40 minutes later the explosion leveled a city block.

His wife, Abby Barr, released a statement to The Associated Press on Wednesday afternoon saying he had been a volunteer firefighter for 15 years and was the "best husband a girl could ask for." The two owned a bar that was destroyed by the blast.

She said he lived his life by the motto "happy wife, happy life." The couple was raising a pair of twin girls who just turned 3 years old. She said the girls would run up to him screaming "Daddy's home!" whenever he walked through the door.

"We didn't lose a firefighter yesterday, we lost a family member, we lost a friend and we will be affected forever but we will continue to build strength and be a better organization with Cory in our hearts," Garrison said Wednesday evening.

Another firefighter was critically injured in the gas explosion and fire. That firefighter's condition was upgraded Wednesday and he is the only person still hospitalized. Sun Prairie EMS Chief Brian Goff said a total of 12 people were transported to the hospital Tuesday night. Authorities said at a press conference Wednesday morning that at least six firefighters were injured along with some civilians.

At least five structures were damaged, including Barr's tavern named the Barr House.

Patrick DePula owns a restaurant just down the street from the Barr House. He said he's known Barr for several years and that Barr was very proud of Sun Prairie and wanted to both preserve the city and transform it into a travel destination.

Gov. Scott Walker expressed his sympathy, saying Barr’s death is the hardest challenge for the community to overcome.

"Obviously the biggest tragedy of it all," Walker said. "You can replace buildings, but to lose a firefighter really is the most painful thing out of all of this."

My wife Jo and I are thinking of the people of Sun Prairie today. We mourn with the family, friends and colleagues of the brave Sun Prairie Firefighter, Capt. Cory Barr, who lost his life. We wish a speedy recovery to all those injured and reeling from this devastating experience

Sun Prairie police Lt. Kevin Konopacki said Wednesday morning there had been no reports of people missing following the gas leak and explosion.

The explosion in the 100 block of West Main Street happened around 7 p.m. after a contractor struck a natural gas main about 40 minutes earlier. Firefighters and police in the community of about 30,000 had responded and Konopacki said an evacuation of several city blocks was underway when the blast occurred. The fire resulting from the explosion ignited some cars parked in the area.

A plume of smoke could be seen for miles around Sun Prairie, a suburb of Madison.

Amy Jahns, a We Energies spokeswoman, said the flow of natural gas to the area was stopped around 9:30 p.m., leaving about 500 customers without service.

"Our ultimate concern is just safety," she said Tuesday night. "We're following the direction of the authorities, we're checking the area to see if there's any natural gas that may have migrated to other buildings in the area, and will continue to do so throughout the evening."

Chad Boyd was in his apartment about one block away from the explosion, and heard the blast.

"I actually thought that like, a semi truck ran into my building, that's how explosive it was," he said. "It was a huge impact and it shook the walls."

People in the area surrounding the explosion, including several apartment buildings and assisted living facilities, were evacuated. Earlier Wednesday, authorities had cordoned off a half-mile radius from the blast zone downtown.

Evacuees were slowly being allowed back in their homes as of late Wednesday morning, pending clearance by We Energies. At Wednesday evening press conference, officials said We Energies was still working to restore service in the area house by house.

Wednesday afternoon in Eau Claire, Walker said the state will offer any help government officials need in the wake of the explosion. Walker visited Sun Prairie Wednesday evening to support local authorities while they investigate the cause of the explosion. He said it's important to make sure it doesn’t happen anywhere else in the state.