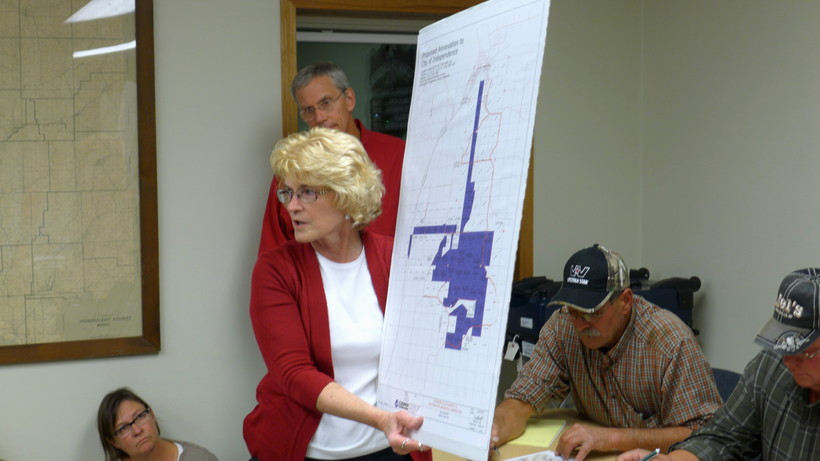 A mine developer with Superior Silica Sands holds a description of the annexed property the company hopes to build a frac sand drying and rail loading facility on. Photo: Rich Kremer/WPR News.

Two towns in Trempealeau County in western Wisconsin decided on Thursday night to wait on a decision to sue the small, nearby city of Independence for the questionable annexation of a frac sand mine.

The combined meeting of the towns of Burnside and Lincoln was originally going to end with a potential vote to sue Independence for the annexation. During the meeting, however, the town boards were presented with an offer from Texas-Based Superior Silica Sands, a company that’s considering purchasing the mine from current operator Cameron Rail. The agreement would entail annual payments of $25,000 over 20 years, as well as home value guarantees for certain residents.

Superior Silica Sands indicated that it may pass on buying the mine if the lawsuit were to proceed. Company representative Anders Helquist reminded the boards the mine is already there.

“This isn’t a referendum on frac sand mining,” he said. “It’s who do you want to be the operator — Superior Silica Sands or Cameron Rail?”

Superior Silica had already been involved in the mine, doing construction work on-site. In order to avoid strict county regulations, the company had convinced Independence to annex the mine. Before the city could do so, however, it needed a thin strip of land through Burnside and Lincoln. Superior Silica had asked the towns for their blessings, but didn't offer any money. The towns rejected the idea, and the annexation happened anyway.

Earlier this month, the state issued an opinion saying Lincoln and Burnside could sue the city of Independence for the annexation because the mine property didn't touch the city. They now have 35 days to go to court.

During public comment at Thursday night’s meeting, board members were urged not to sell out and to follow through challenging the annexation. Ultimately, Lincoln town board chairman Jack Speerstra said they needed more time to decide.

“This is the first time our boards have been able to talk about even the litigation issue, and we literally just got an agreement from Superior Silica, and there’s a lot to digest in there,” he said.