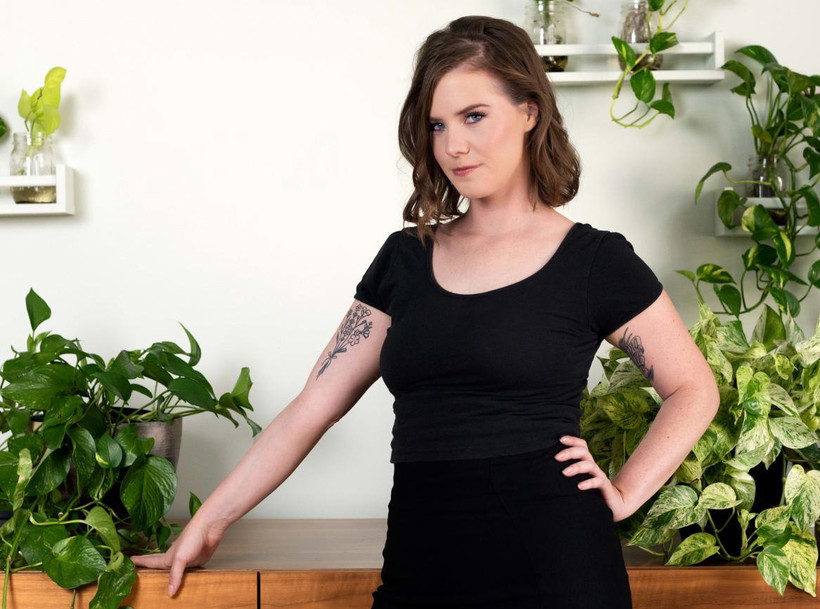 Carr's Memoir, 'All That You Leave Behind,' Explores Powerful Bond Between Her, Father
By Doug Gordon
Share:

Erin Lee Carr is a documentary filmmaker. Her films include "I Love You, Now Die," about the Michelle Carter murder-by-texting trial and "At the Heart of Gold," which deals with the USA Gymnastics scandal. Both films were made for HBO.

Carr is also the daughter of the inimitable journalist and best-selling author David Carr, who suffered a fatal collapse in The New York Times newsroom in 2015. He was 58.

Erin Carr was shattered by her father's death and sought solace by going through all of their shared correspondence, which amounted to almost 2,000 items. Now, she's written a memoir about the powerful bond she and her father shared. It's called, "All That You Leave Behind."

"I’m deeply humbled to be David Carr’s kid, but I would say that our brains work pretty differently," Erin Carr told WPR's "BETA." "As I was thinking about writing my book and writing a book that was a lot about my father, our relationship and the advice he gave me, I thought about structuring it like a film. And I think that something that I always wanted to pay very close attention to is why is somebody going to read this and how am I going to keep people engaged?"

"And while my dad’s book was about 400 pages, that guy had a lot of thoughts, mine is not 400 pages and is really about getting to the point of the story quickly and bringing you on this sort of whiplash, very fast course of what happened.

Because I think there might be some eye-rolling — 'Oh, a 31-year-old wrote a memoir. Wow.' No, it’s about adulthood and it’s about choices and it’s about, you know, processing things in real time. And who amongst us does not have to do that?"

As Erin Carr writes in her book, when she and her twin sister, Meagan, were growing up, their father often told them that "everything good started with you." So If that was the case, Carr realized that there must have been an "everything bad" before there was an "everything good."

This raises the question of what were the worst things she discovered about her father from the "everything bad" period of his life?

"You know, I think that the book really goes into alcoholism, that it explains everything and excuses nothing," Erin Carr said. "I really had to deal with my father’s relapses and to be clear, he was sober for the majority of my life. I encountered a sober father. But I think there are times when the addiction got a hold of him and he was not able to retain his sobriety. And so interacting with him when that would happen, it was devastating. It was confusing, it was scary. He didn’t know how to communicate about it, I didn’t know how to communicate about it. The rest of our family didn’t know. But he found his way back to sobriety, for which we all were incredibly grateful."

But before David Carr found his way back to sobriety, there were some dark moments in his life when he served as a single father to Erin and Meagan.

"I think it was struggling with wanting to get high with having two children," she said. "I think that he writes about going to a crack house and bringing us along inside the car and unsure if we were alive when he got back to the car, knowing that it was not a moment that God would forgive."

"So I think for him, that was most assuredly a moment of reckoning that he had to deal with. But I really think the financial insecurity took hold over his life. I mean, he was on welfare when we were little kids, you know, he was destitute. And he was responsible for two kids," she continued.

"And so I think that there are moments of great fear that you remember like the snowsuits in the car story. But then for years, he was consistently pretty unstable in the financial department, which I’m sure made it impossible to parent in a fully present way. I mean, it was not looking like this was going to end up in a happily ever after, for which I think it did. But I think that is the strength and that is what sobriety is. It really can change your life in a manner of years."

As she grew older, Erin Carr had her own struggles with alcohol and her father was able to offer some support.

"He had a unique approach. As somebody who was sober, he used his sobriety to role-model behavior, never pushing his own sobriety on me. Because that’s what they talk about, you can’t make someone else get sober, they have to get sober for themselves," she said. "So he was able to talk about the gifts that sobriety had given him and maybe hint or infer that I could maybe try to do the same. He did speak to me plainly a couple of times where my drinking got out of control about this is not something that’s going to go well for you."

One of the most striking things about her book is the recollections of how open her father was in expressing his love and admiration for her.

A perfect example is the poignant letter he wrote for her 21st birthday:  "You are a fundamental joy of my life. Who you are and how you proceed brings me a sense of deep happiness I can't express in words."

He proceeds to express this sense of pride and happiness in a very eloquent manner. His love and support must have given Erin Carr a great deal of self-confidence but did it also make her feel extra pressure to live up to his success?

"The amount of positive feedback that I got as a young person is borderline unparalleled," she said. "I interact with a great deal of parents now, a lot of my films are about parenting, relationships, and it’s because it was something that was so foundational to my learning of the world. And I think that if we ever to choose children, you or I or anybody that’s listening to this, just expressing how much you love your kid, but also saying why they’re special, what you think about when you think of them. I don’t know. I love every second of it. I love reading it now, it emboldens me to know that somebody that I love so much felt that way about me. I think that we could all do with doing some more positive emailing. I love those emails. To this day, I read them continuously, thinking that he’s speaking to me today and not back then."

Erin Carr learned a lot from her father but can she point to one life lesson that she considers the most important?

"I spent close to two years of my life thinking about an answer to that question. And as we sit here on this day and I think about the answer, for me it’s always been his advice that I think about every day. For me, it’s: Find the smartest people in the room and stick with them. That’s who you want on your team," she said. "Be a good talker but be a better listener. You are who you run with, meaning we are the sum total of the five people we spend time with. Kindness matters. Art comes in the space between people."

"I’m basically a walking dictionary of David Carr phrases," she continued. "I literally studied him and the way that he communicated and what he said to me in emails. And I think about him probably every hour of every day, which is a little abnormal. But I think that it really helps me as I work on these movies and have this difficult subject matter to think about somebody that has given me advice on it and how to do the next right thing."