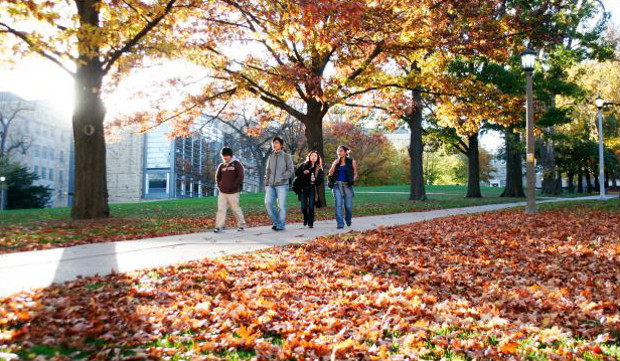 A law professor says gun advocates on both side of the issue may be trying to recruit college students to their side as state legislators debate allowing guns into campus buildings. Amanda Salm (CC-BY-NC-ND)

Fight Over Gun Rights At Universities Is About More Than Public Safety, Says Professor

Efforts to legalize concealed weapons in public university buildings across the country — including in Wisconsin — may be more about recruiting youth in a culture war on gun laws than actual public safety, says one law professor.

"I think what’s really going on for many gun advocates is that they want to see guns everywhere, they want to see guns normalized," said Adam Winkler, a law professor at UCLA. "And one of the best way to normalize people to the presence of guns is to do it when people are young. That’s when they really gain their values and their understanding of the world."

Winkler, who is also the author of "Gunfight: The Battle over the Right to Bear Arms in America," added that advocates for gun control want to keep guns off of campuses for those reasons as well.

Wisconsin has become the latest state to debate expanding gun possession rights at universities after two Republican lawmakers proposed a bill that would allow guns inside buildings on University of Wisconsin campuses. The proposal comes two weeks after a gunman killed nine people at an Oregon community college. The bill's author says that increasing the concentration of guns on a campus can help prevent such mass shootings.

Under current law, public colleges and universities in Wisconsin allow concealed carry license holders to bring guns on campus, but not inside buildings.

Winkler said seven states currently have laws that allow people to carry concealed guns on campus, although the details can vary on who can carry a gun and in what areas. He said about 20 states completely ban the carrying of concealed weapons on campus, while 22 states leave the decision to individual colleges, with the vast majority of them prohibiting guns on campus.

Once Utah became the first state to pass a law allowing concealed weapons on public universities in 2004, Winkler said other states were quick to follow with similar legislation.

"This has taken off because there’s many people who favor strong gun rights who believe that really guns should be everywhere — that if you don't have guns in a place, then it's a so-called gun-free zone and it's an actual invitation to mass shooters to come to that place because you know you can find a lot of unarmed victims that won't be able to shoot back," he said.

Winkler said research shows that it doesn’t appear that having guns on campus will lead to any significant reduction in mass shootings because of age restrictions to get a conceal carry license.

"For instance, Wisconsin allows concealed carry of firearms, but you have to be 21 years or older to get a concealed carry license. That eliminates virtually half or more of the undergraduates at any given time at the university who just wouldn't be allowed to carry a gun no matter what," Winkler said.

Winkler said that regardless, college campuses in America remain "among the safest places for young people to be."