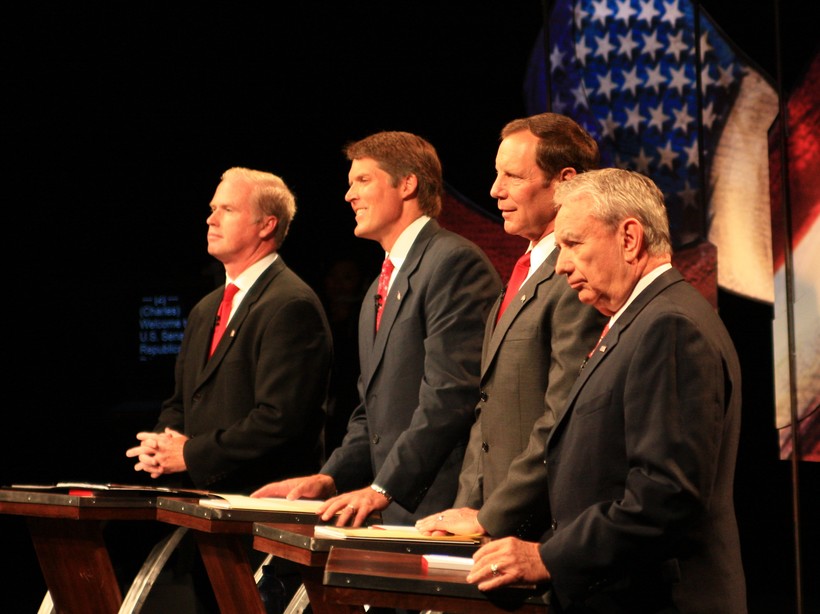 Republican primary voters looking for some policy differences between the candidates for US Senate could find at least a couple Friday night in a debate hosted by Wisconsin Public Radio and Television.

One of the four men will emerge from Tuesday’s primary to take on Democratic Congresswoman Tammy Baldwin in the November general election.  Recent polls suggest a close primary race with one-in-five likely primary voters still undecided heading into the closing days of the campaign.

The Other Health Care Law

Much of this campaign has centered on President Barack Obama’s Affordable Care Act, with all four candidates saying they’d like to repeal the law.  But when given a chance to attack their opponents' positions on the health care law Friday night, all four took a pass.

The situation was different when it came to another sweeping health care law, Medicare Part D.  It was Thompson who offered the most full-throated defense of the law, passed by Congress  when Thompson was President George W. Bush’s Health and Human Services Secretary.  Part D for the first time added prescription drug coverage to Medicare.

“Medicare Part D was a very important program,” Thompson said.  “What was happening was seniors couldn’t get the drugs and couldn’t afford them.  Part D accomplished a great deal.”

Hovde, while not saying he would repeal Part D, was highly critical of the way it was funded and the restrictions placed on it by Congress.

“Our federal government was not allowed to negotiate with big PHRMA on the purchase of those drugs,” Hovde said, noting that the law also banned the federal government from buying drugs from Canada.  “In my view, it was way too much of a gift to big PHRMA at the expense of the taxpayers.”

Neumann, who repeatedly brandished a bound copy of his campaign’s budget proposal, said the plan laid out many ways the federal government could cut money.

“One hundred-fifty items I’ve got laid out in our plan to balance the federal budget,” Neumann said.  “We didn’t deal with Medicare Part D—we get the job done without dealing with that and without getting rid of that.”

“This is something you have to prioritize.  And is a vital part of what I think seniors look for.”

The candidates were also asked to consider a scenario much like what happened in 2008, where multiple big banks fail and economists warn of a pending financial system collapse.  Only Hovde said he would support any kind of government intervention.

“If you were going to crater the commercial banking sector where people will no longer be able to show up and get their deposits, and you have a bank run of the magnitude that we did in the great depression, then obviously you’re going to have to do something to save the system,” said Hovde.  He stressed that he would not favor bailouts to investment banks like Goldman Sachs or Morgan Stanley and that banks who did receive government help would face repercussions.

The other candidates were far less nuanced.

“I do not believe that we should be bailing out and helping the banks,” said Thompson.  “We tried that once before.  It was a dismal failure.”

Neumann said his own homebuilding industry had to make it without a bailout and so should banks.

““The answer is no, we need a free market system to work in America”

Fitzgerald said he agreed with Neumann.

“You can’t pick winners and losers of who to bail out and who not to bail out.  And plus this created a whole ‘nother thing of creating banks that are too big to fail.”