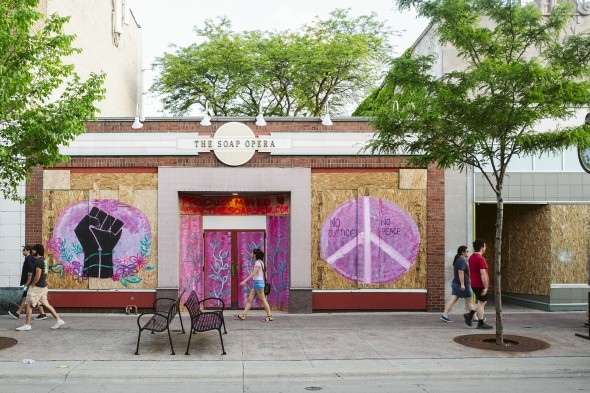 Artwork is displayed on boarded up store windows on State Street in downtown Madison, Wis. on June 3, 2020, near the intersection an 18-year-old Black woman said she was attacked later that month. Keni Rosales/WPR

Federal prosecutors have closed their investigation into an alleged hate crime against a Madison woman, citing insufficient evidence.

In June, Althea Bernstein, who is Black, told police that four white men approached her car at night as she was driving in the State Street area in downtown Madison. According to the police incident report, one of the men sprayed a liquid on her face and neck and then threw a flaming lighter at her, causing the liquid to ignite.

She was treated for burns at a hospital where staff believed the liquid was lighter fluid.

Shortly after the police report was filed, the Madison Police Department announced that the Federal Bureau of Investigation was joining the case.

The U.S. Attorney’s Office said in a statement Friday that a team of federal and state investigators conducted interviews and reviewed traffic cameras but found "insufficient evidence to pursue federal criminal charges," and could not establish if the alleged attack occurred.

Federal and local agents met with Bernstein to inform her they were closing the case.

The Wisconsin State Journal reports, Bernstein’s family issued a statement, saying she is healing, and they appreciate the investigative effort of those involved in the case.