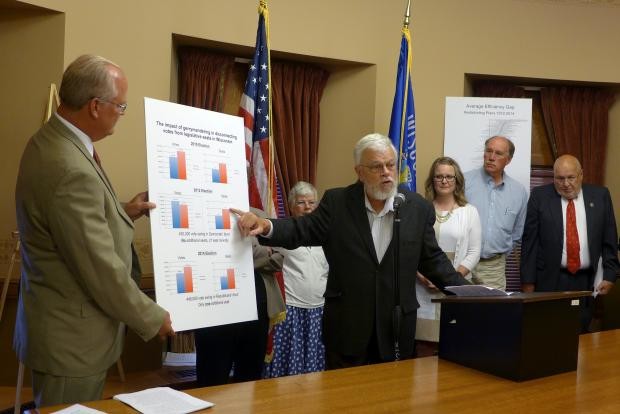 Plaintiffs outlining their case shortly after they filed suit in July.

A panel of three federal judges are considering whether to dismiss a lawsuit challenging the constitutionality of the state's legislative redistricting plan.

The plaintiffs, a group of 12 Wisconsin voters, claim that the plan approved by Republicans in 2011 is an example of extreme partisan gerrymandering that creates voting districts unfairly benefiting one party. At a hearing in Madison Wednesday, Chicago attorney Michele Odorizzi said the plan drew partisan lines that violate a voter's constitutional right to equal protection under the law.

"You have a right to be treated equally by the election system and not have your vote diluted or be treated differently because of your political beliefs," he said.

Lawyers for the state Department of Justice said the U.S. Supreme Court has rejected similar arguments in the past, but Odorizzi said the court recently opened the door to establishing a standard for ensuring district lines result in fair elections.

If the case goes to trial, attorneys for the voters will present a formula for courts to use to determine whether district lines are overtly partisan. However, attorneys for the state say no formula can account for all the variables in every election.

Assistant Attorney General Brian Keenan told the court there's no way to predict how district lines will create an unfair partisan tilt when an election is held.

Judge Barbara Crabb suggested the proposed standard sounds like one courts often use when trying obscenity cases. A plaintiff in the case, Eau Claire attorney Wendy Sue Johnson agreed with that assessment.

"Just like pornography, it may be difficult to define, but people know it when they see it," she said.

She said that fairness may be similarly difficult to define, but that that's where "intelligent judges" come in.