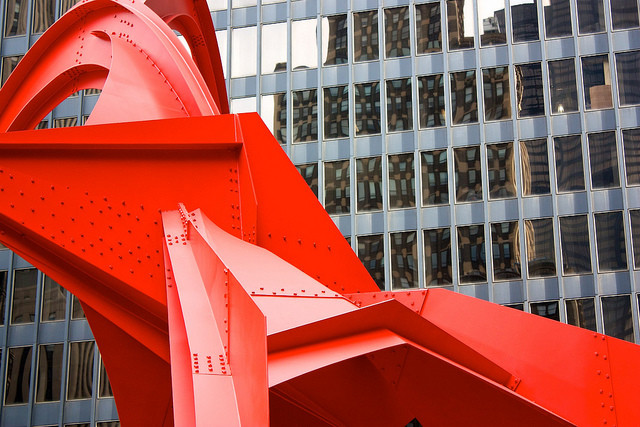 The federal plaza outside the Dirksen Federal Building in Chicago. Photo: Tony (CC-BY-NC-SA).

At Least One Judge Signals She May Be Open To State's Request To Immediately Reinstate Law
By Erik Lorenzsonn and Shawn Johnson
Share:

Update - 4:44 p.m.: The federal appeals court has lifted an injunction that blocked enforcement of the voter ID law. Read more on the order here.

Federal appeals court judges in Chicago heard oral arguments in a legal challenge to Wisconsin’s voter ID law on Friday morning, with their toughest questions directed at the plaintiffs’ attorneys.

The judges presiding over the hearing noted that the U.S. Supreme Court ruled in 2008 that states have a “valid interest” in deterring voter fraud through policies like voter ID requirements. Judge Frank Easterbrook questioned whether the ruling on appeal — in which a district judge declared Wisconsin's law unconstitutional — was essentially saying that the Supreme Court was wrong.

U.S. Judge Diane Sykes also signaled that given the precedent of “valid interest,” she was possibly swayed by the defense’s request to reinstate the law in time for the upcoming election.

For their part, attorneys for the American Civil Liberties Union, which filed the lawsuit, argued that no court had ever allowed a voter ID law to be reinstated so close to an election.

Sykes also cited a recent ruling by the Wisconsin Supreme Court that upheld the voter ID law. She asserted that the ruling, which declared that the state could not require a certified birth certificate for getting an ID, already addressed concerns brought forth by ACLU attorneys about the cost of getting an ID.

The judges, however, pushed back against the defense’s argument that the law was valid because it polled well. Said Judge John Tinder: “Popular laws can be unconstitutional.”

An injunction on the law will remain in place for now, at least until the appeals court makes its ruling. You can listen to the oral arguments in the case here.