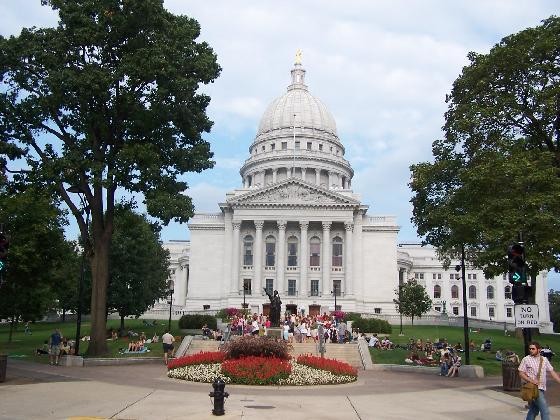 Next week, a federal judge in Madison will hear arguments in a case challenging the constitutionality of the current rules restricting protests at the State Capitol.

At a news conference on Thursday, protesters and their attorneys joined three state legislators in calling for an end to the current practice of ticketing protesters for carrying signs.

Over the past several months the Capitol Police have issued 68 citations to people either singing or carrying signs in the Capitol rotunda protesting a variety of policies adopted by the governor or the legislature. A former county prosecutor from Kenosha, Robert Jambois, is defending several people who were cited; he says the citations are designed to chill the free speech rights of his clients.

"That rotunda was designed to be a place for the people to give voice to their position on the issues. That right is being taken away. That right is the victim of a frontal assault by this government."

None of the citations have been upheld in court, and the Department of Justice has chosen to drop many of the cases because the attorney general's office has decided it could not obtain a conviction. Speaking to reporters in Milwaukee yesterday Attorney General J.B. Van Hollen said protesters at the capitol are not the ones who have suffered.

"I think there are a lot of citizens who feel like that they don't really have access to the capitol anymore, because they feel that there may be a risk to them because of all the protests and everything. If there's been a limit, it's been for people who may otherwise have wanted to take their families through the capitol who are skeptical to do so. And I would encourage them that there's no reason to be skeptical."

The Department of Administration is drafting new rules governing protests in the Capitol. Protesters fear the agency will impose new restrictions. The court hearing challenging the current rules takes place next Wednesday at the federal courthouse in Madison.

See the proposed DOA amendments to current rules below: