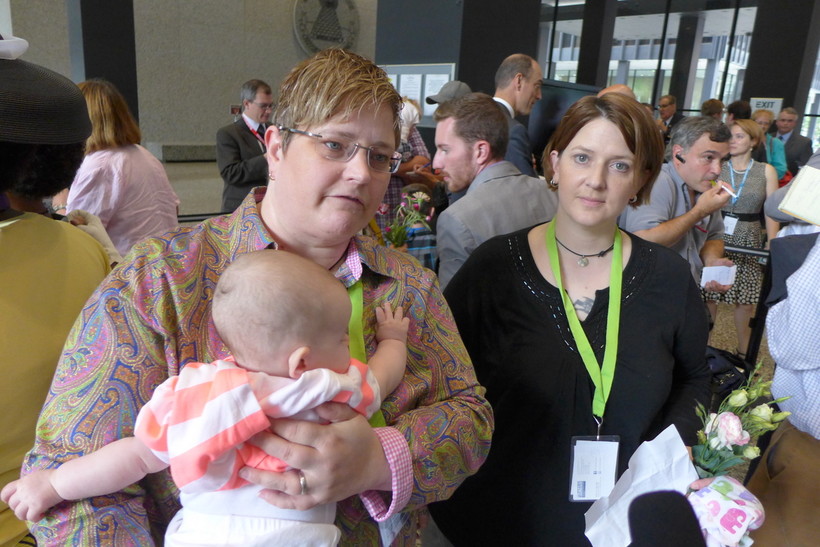 The 3-0 ruling came only 10 days after three judges from the U.S. 7th Circuit Court of Appeals heard oral arguments for two separate cases challenging bans in Wisconsin and Indiana.

The majority opinion in the ruling, which also struck down Indiana's same-sex marriage ban, was written by Judge Richard Posner, a President Ronald Reagan appointee who was extremely skeptical of the states’ defense of their respective bans during oral arguments. In the opinion, Posner wrote that the state's rationale for the ban “is so full of holes that it cannot be taken seriously.”

Posner wrote that “when there is no justification for government’s treating a traditionally discriminated-against group significantly worse than the dominant group in the society, doing so denies equal protection of the laws.”

As he did in the hearing, Posner also focused in part on the children of same-sex couples in the opinion, writing that they “would be better off both emotionally and economically if their adoptive parents were married.”

Wisconsin voters added the same-sex marriage ban to the state's constitution in 2006. That popular vote was one of the reasons lawyers for the state said the ban should be upheld. That argument did not sway Judge Posner, who wrote: “Minorities trampled on by the democratic process have recourse to the courts; the recourse is called constitutional law.”

ACLU Attorney Larry Dupuis, who represented the same sex couples who brought this lawsuit, said he was elated by the court's decision, which affirmed the ACLU's arguments against the same-sex marriage ban.

“It hurts minorities and particularly it hurts children, which is who the states are purporting to try to help,” said Dupuis. “And that was also another of (Posner's) themes during oral arguments was, ‘Look, if you're trying to help children of accidental procreation, why are you refusing to allow people who might be adopting those children to marry?’”

Kami Young of Milwaukee, a gay parent who joined the ACLU's lawsuit challenging Wisconsin's ban, said she was overwhelmed as she read the ruling.

“It means so much to me and my partner and ultimately it will mean so much to our child,” said Young.

Young's partner, Karina Willes, said she was particularly moved by what the court said about children.

“It moved me to tears once again, because that's why we're doing this,” said Willes.

Wisconsin Family Action, the group that pushed for Wisconsin's same-sex marriage ban in 2006, called the ruling a “denial of reality” and said that the “struggle to preserve and protect traditional marriage is far from over.”

Dana Brueck, a spokeswoman for Attorney General J.B. Van Hollen, said Van Hollen had always believed that this case would ultimately be decided by the U.S. Supreme Court. Brueck also said a lower court's stay remained in effect, which would prevent same-sex couples from marrying until appeals have been concluded.

Dupuis concurred that the stay would remain, though he said that could potentially change when the court issues its mandate on this ruling in 21 days.

You can read the opinion written by Judge Posner below:

Editor's Note: This is a breaking news story, and will be updated as Wisconsin Public Radio News learns more information.