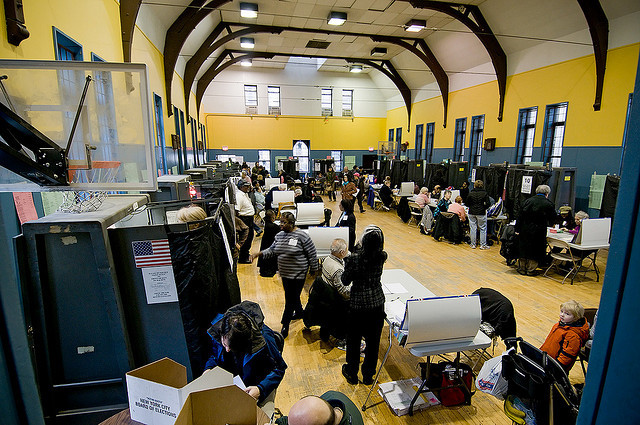 Thanks to the stay, the state may now enforce the requirement for people to show photo ID at polls. Photo: Joseph Holmes (CC-BY-NC-ND).

Wisconsin Can Now Decide Whether To Enforce Law For November Elections
By Erik Lorenzsonn
Share:

A federal appeals court in Chicago lifted an injunction on Friday that blocked a Wisconsin law requiring voters to show a photo ID at the polls.

The court’s order for the injunction to be stayed came merely hours after three of its judges heard oral arguments in a case challenging the law. The order declared that the state “may, if it wishes (and if it is appropriate under rules of state law), enforce the photo ID requirement in this November’s elections.”

In justifying its stay, the court cited new policies implemented by the Department of Motor Vehicles that aim to make it easier for people to get a photo ID without presenting a birth certificate. It said that the new policies make it less likely for "irreparable injury" to be caused, and that the state's likelihood of winning the case is now “sufficiently great that the state should be allowed to implement its law, pending further order of this court.”

Though the order means that the voter ID law is now enforceable, the court has yet to rule in the case. Read the court order here.