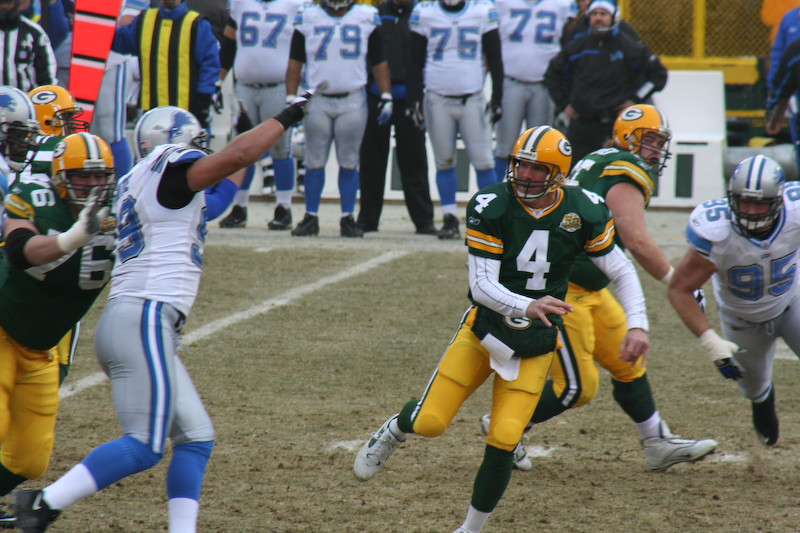 Brett Favre throws a pass against the Detroit Lions on Dec. 30, 2007, at Lambeau Field in Green Bay. Matt Porubcansky (CC-BY-NC-SA)

Controversial Quarterback Will Be Inducted Into Packers Hall Of Fame Saturday
By Bill Martens
Share:

While some Green Bay Packers fans still hold a grudge against quarterback Brett Favre for his actions following his retirement from the team years ago, a Milwaukee sportscaster insists he’s worthy of being honored this weekend.

Favre will be inducted into the Packers Hall of Fame on Saturday evening at Lambeau Field and have his number retired.  During his 16 years with Green Bay, Favre threw 442 touchdown passes, 61,655 yards and started 255 consecutive games -- all franchise records.

The three-time NFL Most Valuable Player also led the team to a Super Bowl victory in 1997 over the New England Patriots, the Packers’ first championship in 29 years.

Favre retired from the team in 2008, but a few months after his announcement, the relationship between him, the Packers organization and Packers fans began to deteriorate. The team had accepted life without No. 4 and turned to Aaron Rodgers to lead them into the future.  However, Favre decided he still had an "itch to play" and was never completely committed to retirement.  After an awkward summer, the Packers traded Favre to the New York Jets where he played for one disappointing season, then retired again.

For a second time, he unretired and signed with the much-despised Minnesota Vikings, infuriating Packers fans. In his first trip to Lambeau Field as a Viking, Favre was greeted to a loud chorus of boos and jeers while fans wore shirts that read "traitor," "Judas," and other choice descriptions.  Favre and the Vikings won the game, 38-26. He wore the purple uniform for two years before calling it a career in 2010, this time for good.

Five years later, most fans -- including Jessie Garcia, sports reporter and anchor at WTMJ-TV -- appear to have put the past behind them and allowed time to heal their wounds.

"I will admit that at the time, I was kind of mad at Favre myself.  You know, how could he do this?  Etcetera, etcetera," Garcia said Friday.

She said she understands how some people are still upset, but that when she considers that he played a large role in resurrecting the franchise and put his body on the line every week, she can’t help but be thankful for his years in Green Bay.

"I think he really, really deserves to be celebrated tomorrow night," Garcia said.

Aout 67,000 people are expected to attend the ceremony.  Garcia predicted that "most" of them will cheer him on.  She said that of the people she’s talked to, about 85 percent of them have forgiven Favre and are ready to embrace him.

The ceremony will begin at 7 p.m.  Favre will also take part in a question-and-answer session at midfield at 6:30 p.m.