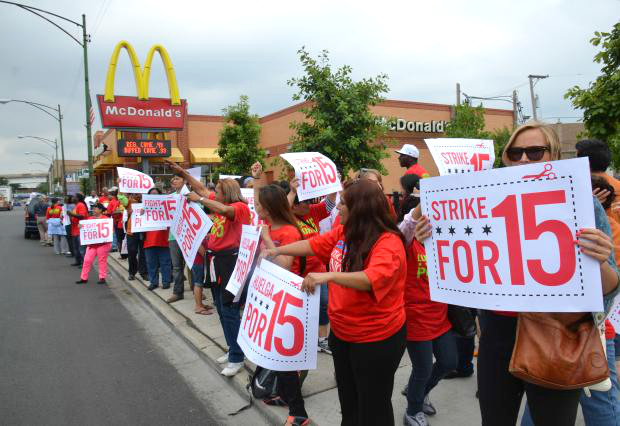 Protesters at one of the fast-food strikes that took place last year. Photo: Steve Rhodes (CC-BY-NC-SA).

Workers In Madison And Milwaukee Will Join Others Across The Country In Walking Off The Job
By Gilman Halsted
Share:

Fast-food workers in Milwaukee and Madison will walk off the job on Thursday as part of a national protest for the right to unionize and a $15 an hour minimum wage.

Organizers of the strike predict it will be the largest in a series of job actions that have been carried out by low-wage workers over the past two years. This one will involve workers in 160 cities across the country.

So far none of the fast-food chains the strikes have targeted have agreed to the wage increase. Jennifer Epps-Addison of the group Wisconsin Jobs Now said that the walkouts have nevertheless had an impact in cities like San Francisco, which just passed a fair scheduling act giving workers more control over their hours.

“If the company you're working for refuses to give you full-time hours, you can at least plan your second job or your child-care obligations or your education around the part-time hours you are able to get,” said Epps-Addison.

Twenty-one-year-old Marielle Crowley earns $8.50 an hour at a Milwaukee McDonalds. He said that he needs a $15 an hour wage to be able help support his parents and pay for his education. He recently dropped out of school because his work schedule left no time for classes.

“I had to let school go so I could focus on being able to pay rent , and make sure that I have a phone bill that's paid and we have food in our house,” said Crowley.