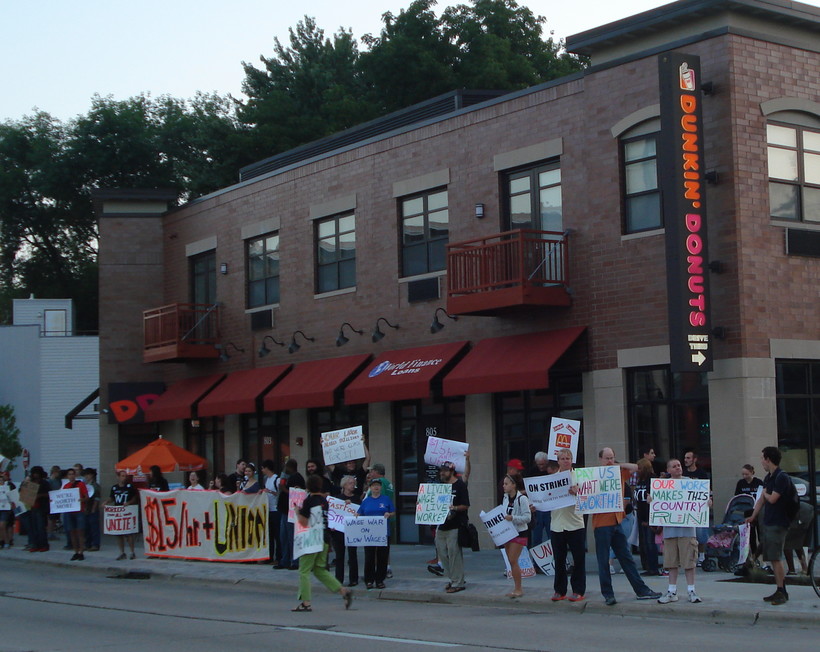 Some fast food workers are walking off the job today, demanding a wage increase to $15 per hour and the right to unionize without fear of retaliation.

Several Dunkin' Donuts workers walked out to cheers of support from organizers and fellow strikers at sunrise this morning.

More than 60 people chanted and held signs, joining strikes in 50 cities across the country including Milwaukee, Chicago and Los Angeles. Meghan Ford says she has to work four jobs to pay her bills. She's a little worried she may lose her job at Dunkin' Donuts after walking out, but she says it's worth it.

"When I see my other coworkers who are working 40 hours a week and they can't pay their bills either, it's just ridiculous," she says. "We're on our feet for seven hours a day and the last thing you want to do is go to another job and another job."

Kevin Gundlach, president of the South Central Federation of Labor, says the strike was spurred by walkouts earlier this year.

"It's inspiring seeing so many people out at 6 a.m. and it will build from there," says Gundlach. "We already have many, many elected officials here in the Madison area supporting this."

Strikers rallied outside several restaurants in Madison including Dunkin' Donuts, McDonald's, Taco Bell, and Burger King. Organizers at Wisconsin Jobs Now, a union-backed workers' rights group based in Milwaukee, say 35 workers planned to walk out in Madison, 200 in Milwaukee, and some in Wausau.

Update 5:01 p.m. Both Madison Mayor Paul Soglin and U.S. Rep. Mark Pocan, (D-Wisc.) have spoken to the protesters this afternoon.

Check out a video of protesters in Madison entering a Burger King to chant try to get other employees to join them: