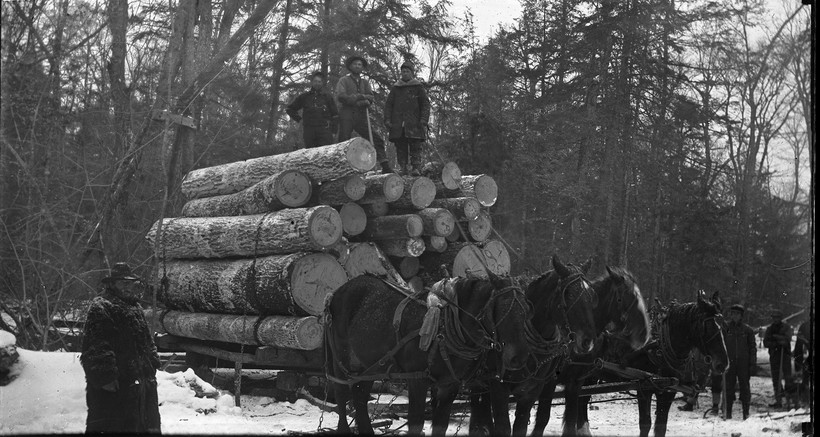 One of dozens of historic photographs in the book, "Logging In Wisconsin," which depicts the state's rich history in the industry. Photo courtesy of the Paul Bunyan Logging Camp Museum

Some in Wisconsin hope luring electronics manufacturer Foxconn and thousands of new jobs to the state will help turn America's Dairyland into the next Silicon Valley.

A book by two Eau Claire authors is a reminder that before the state gained its farming reputation, the future of the state was shaped by the logging industry.

"Logging In Wisconsin" is part of the Images of America series, which tells stories of the past primarily through old pictures.

At the time, more than 80 percent of the state was covered in trees.

"In the 1890s, they really thought that they could cut almost forever without damaging the land, and that there was an infinite supply of trees," Peterson said. "And sadly by 1920, they had pretty much depleted the whole state. During those 60 or 70 years they really changed the geography of Wisconsin, building dams, changing the course of rivers, cutting down trees.

The white pine, known for growing tall and straight, and its ability to float was the most-harvested tree. Wisconsin's logging industry was complex and required thousands of jobs not only harvesting trees in the forest and producing lumber in sawmills, but in support jobs.

What was left after the logging? Fields of stumps that needed to be cleared to make room for the state's next big industry, one that gives Wisconsin its identity today: farming.

The Great Depression allowed Wisconsin to transition from the failed logging industry to agriculture. Eastern European immigrants recruited much of the land that had been logged, said co-author Carrie Ronnander, director of the Chippewa Valley Museum in Eau Claire.

"They encouraged farming to take place in these northern lands where all these stumps existed, so these farmers would have to spend years and years doing back breaking work trying to get rid of the stumps so they could actually farm the land," Ronnander said.

Without logging, most communities in Wisconsin may not be as developed as they are.

Take the La Crosse area. Built on a sandy plain, it never had the great stands of trees harvested in northern Wisconsin. But the area still had something to offer the logging industry, said Laura Godden, a librarian at the University of Wisconsin-La Crosse's Murphy Library.

"La Crosse became heavily involved in logging because it's situated at the Mississippi and Black rivers," Godden said. "It became a place that the loggers could float the logs down to and then have sawmills there where they could be sawed into lumber and sold."

The decline of logging in La Crosse was very abrupt. The last sawmill closed in 1906. Manufacturing became the city's main industry. But many of the city's landmarks such as parks and historic homes are still named for those who made their fortune from lumber.