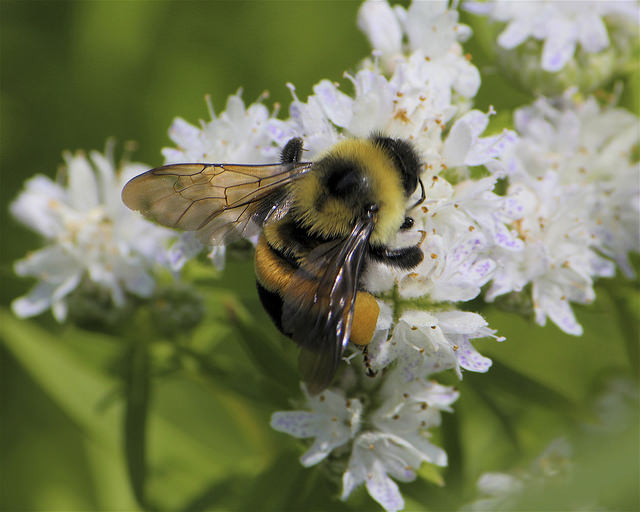 Out of the 14 species of bumblebees seen buzzing around southern Wisconsin, the listing of the rare rusty patched bumblebee as endangered recently became "effective," making it the first bumblebee to be listed as endangered under a federal law.

News broke in January of the bumblebee's endangered designation made under the Endangered Species Act, but it's listing wasn't effective until March 21, according to U.S. Fish and Wildlife Service.

Susan Carpenter, the native plant gardener at the University of Wisconsin-Madison Arboretum, said while flowering resources or the bee’s habitat is one of the major contributing factors to the bumblebee's listing. Disease, pathogens, climate change and agricultural pesticides have played a significant role in the insect's decline.

Rusty patched bumblebees pollinate for both nature and agriculture field, but the potential extinction of this medium-sized, yellow- and black-striped bumblebee with a brown patch on its back raises serious concern, as it could affect other bumblebee species, Carpenter said.

Carpenter said rusty patched bumblebees need nectar and pollen to support themselves. They'll visit plants that bloom in the early spring for pollen and nectar. To get nectar and pollen in the woods, they’ll visit spring wild flowers, Creeping Charlie, and flowering trees such as the juneberry and single-flowered ornamental cherries with a lot of pollen.

As the spring season continues, more plants come into to bloom, much thanks to the rusty patched bumblebee.

Carpenter recommends home and community gardeners spend a little more time learning what’s in their garden to help save the rusty patched bumblebee. Clovers and dandelions in the lawn are a good resource for this particular bumblebee.

Market vegetables are pollinated by insects such as bees, so it’s important farmers who have a diversity of crops are not using chemicals extensively, she said.

To act as a citizen scientist to help with rusty patch bumblebee observations, Carpenter recommends documenting photos with the online tool BumbleBeewatch.org.