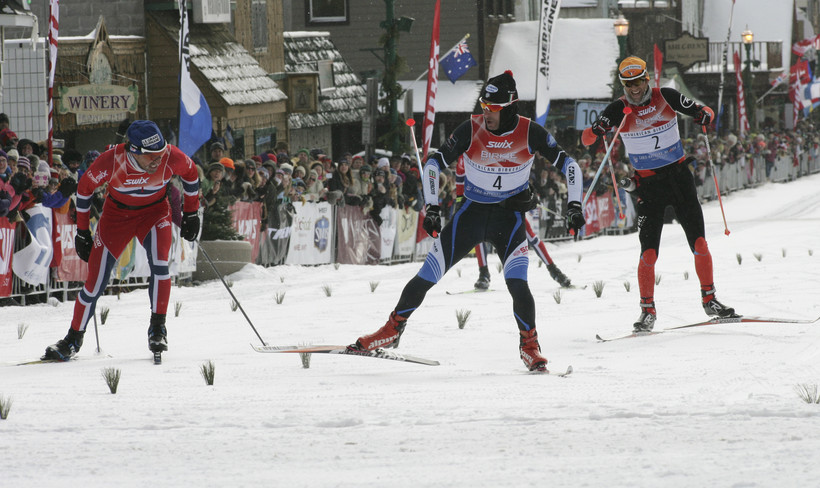 Thousands of skiers and spectators descend on the Northwoods communities of Cable and Hayward this weekend for the American Birkebeiner, the continent’s largest cross-country ski marathon.

In an interview with WPR's "The Morning Show" on Friday, an event organizer discussed this year's promising trail conditions, renewed interest in classic-style skiing and how fans can best watch racers. Ben Popp, executive director of the American Birkebeiner Ski Foundation, previewed the competition with host Kate Archer Kent.

Kate Archer Kent: Skiers come from all over the place — Australia, Saudi Arabia, Kenya — to race in the Birkie. What's attracting skiers near and far?

Ben Popp: This is this amazing tradition steeped in history right here in northern Wisconsin. It's the communities of Cable and Hayward opening up to host the world. The iconic Birkebeiner trail is not only challenging but certainly exciting. Birkie fever, we call it, is just starting to rise. And we're excited to get this thing kicked off.

KAK: The American Birkebeiner was canceled in 2017 due to the warm temperatures and rain. How are the conditions looking right now?

BP: The conditions here are perhaps some of the best since I've been here. It's interesting that we got a lot of snow in December and early January. And then it's been about a three-week stretch where we had very, very little. But the base is really, really good and the conditions are fantastic.

On Monday, we got just a little bit of snow, a couple inches, but it was very light and fluffy, which has set us up really well. I actually think we might have a record time on Saturday. That bodes really well for not only the elite skiers, of course, but just the folks that want to try and survive from Cable to Hayward.

KAK: How many skiers race in a skate technique versus the classic technique?

Traditional skiing really went away in the mid- to late-80s. Slowly the whole world adopted skating and everyone thought classic skiing was going to go away. Now, there's been a really large push to bring back classic skiing. In this year of the Birkebeiner, about 35 or 40 percent of the people will do the classic skiing and then the rest will do the skate skiing. So it's actually seeing a resurgence of this classic skiing technique.

KAK: How do spectators watch the Birkie when these skiers are traveling over miles and miles?

BP: It's not like sitting in the basketball court cheering on the home team. There's trail heads or aid stations where the skiers get nourishment along the way that you can actually stop and see the skiers go by. But then there's also some technology. You can actually put people you want to follow into a race app, and you can see where they are along the trail that follows them as they cross.

But certainly the best way I think — the most engaging and exciting — is to come down to Main Street Hayward and take in this carnival of winter. Right on Main Street, all 11,000 skiers eventually make their way into downtown. And it's just a festival — music and brats and beer. It's just like you're in Wisconsin heaven.

KAK: Can you find a spot near the finish line?

BP: Often no. The last six blocks are right through Main Street Hayward. You come off Lake Hayward and then it is literally packed. People on either side of the street. Having had the experience a few times, I imagine, it must be like if you're Brett Favre stepping on the field. Just loud screaming. And for anybody coming in, it's really an experience that I think is what goes back to driving this event and people coming back, because it's like nothing else in the silent sport world.

KAK: After the race events this weekend, how soon can other skiers visit the trail?

BP: As early as Sunday. We have a large demo on Sunday that people can come out and try new equipment open to everybody. And then by Monday, it's back to business. So if you want to go skiing anywhere along the trail, it's re-groomed and you can come enjoy it. The trail really remains open now until the snow is gone, which is oftentimes late March.