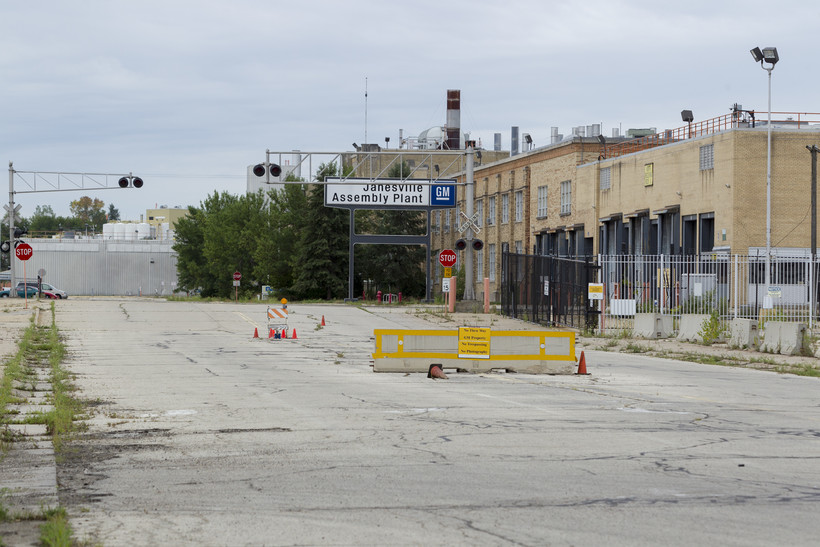 In June 2008, the announcement came that the Janesville Assembly Plant — the oldest operating General Motors plant in the country — would be closed.

By the end of December 2008, the last vehicle — a Chevrolet Tahoe — rolled off the assembly line.

The closure of the GM plant in Janesville impacted thousands of people, from its workers to community members to Wisconsin politicians, and it's the human consequences that are the focus of a new book by Amy Goldstein, "Janesville: An American Story."

Workers crowd around the end of the Janesville General Motors assembly line and the last vehicle to be made at the plant Tuesday, Dec. 23, 2008, in Janesville. Many workers took the opportunity to follow the vehicle as it made its way through the final assembly. Bill Olmsted/The Janesville Gazette via AP Photo

Goldstein, a Washington Post reporter, decided to embed herself in Janesville because she saw utility in taking a close-up look at what happens to people and a community when a major employer shutters its doors.

"I thought that ... people around the country knew the unemployment numbers. They knew the political fighting going on in Washington over whether the government's economic policies to try to help the country out of the recession were good policies or bad policies, but I thought that was different than understanding what it really is like to lose work."

Editor’s Note: Below are excerpts from an interview with Goldstein. Some of her responses have been lightly edited for clarity.

Amy Goldstein: This was in the midst of the Great Recession, which was the worst economic time in this country since the 1930s, and General Motors was really struggling.

There had been rumors for years in Janesville that their assembly plant, which was the oldest operating plant in the whole company, was maybe going to close, but those rumors never proved true. So when this actually happened, it was such a shock.

The Importance Of The Plant To Janesville

Goldstein: I think it was important to Janesville in a couple ways. These were very good working class jobs. At the height in 1970s, there were 7,100 people who worked at that plant, and it wasn't only the GM people themselves who were benefiting from that employment.

The plant spawned lots of supplier companies nearby, so there were thousands of other people who had jobs that paid pretty well because General Motors was there, and then the rest of the economy was benefiting from the fact that they were working class people who were making good money and could buy things in the community.

So there was a real ripple effect that the plant sustained Janesville; and when the plant went away, it really hurt Janesville.

This plant had started turning out tractors in 1919, and it began making Chevrolets in 1923, so if you think about it, that's a lot of generations of workers.

And when the assembly plant was hiring, it often meant that people inside the plant could hand a hiring opportunity to someone they knew — a son, a daughter, a friend — so it was a real community thing to be pulled into this plant.

How The Community Reacted When News Hit About The Closure

Goldstein: I think that people reacted in different ways, but one of the things that really struck me was that at first there was a lot of disbelief, a lot of denial.

The assembly plant had gained and lost products over the decades, and there was this widespread expectation that another product would come in, that this would be temporary, that it might not close, if it did close, it would reopen pretty quickly.

There was a really assertive effort by the state of Wisconsin and people in Rock County and in Janesville to try to persuade General Motors to give this assembly plant a new little car that GM would start making. That effort amassed the biggest amount of money that Wisconsin had ever offered a company to try to lure a business, in this case, to lure a new product to this old plant, and it didn't work.

Goldstein: In this country, the notion of what to do when jobs go away often is, 'Go back to school to learn to do something else.' It's just a very popular idea. So almost 2,000 people in Janesville went to Blackhawk Tech in the couple years after all this work went away.

The question of what is success, I thought, was a very interesting question as I was getting to know people in town, because, as I said, many people who went to Blackhawk didn't finish what they were studying for a whole lot of reasons.

Either financial reasons or because they found that being a student, they weren't cut out to do that. But even people who (were cut out for it) sometimes found that they just couldn't find a decent job in what they had been studying.

I mean, they set up all kinds of programs to try to make it easier for factory workers to turn themselves into students, but I think it's a hard situation when you don't always have enough jobs of the right kind or enough jobs at all on the other end.

I don't think it is an indictment of retraining programs broadly, but I think it does suggest that in a community that's still having a hard time pulling enough jobs into itself, that retraining alone can't solve everything.

An Example Of Community Support

Goldstein: There are two high schools in Janesville, Parker and Craig, and a social studies teacher at Parker ... started to see that she had students who just weren't doing well economically, and she came up with this idea on her own to create what she called the Parker Closet.

It was a small locked room. First, it just started out with Rubbermaid bins on the side of her classroom, and she collected donated food, used jeans, school supplies, and then she got her principal's permission to have a room that was locked with all this stuff in it. And at the beginning, it was not widely known.

It started out her first year with 12 high school kids who were getting supplies from the Parker Closet. Recent years, it's had about 200, and that stayed to this day.

Janesville's Role In The Bigger Political Narrative Of Wisconsin

Goldstein: These job losses happened just a couple of years before Scott Walker was elected governor, and your listeners know better than I do that he's been a very polarizing figure in Wisconsin.

And Janesville and Rock County, where Janesville is the county seat, is a pretty Democratic place. It's got a longtime union, UAW identity that lingers even though a lot of the UAW jobs themselves have gone away, and it had also been a pretty cohesive place.

It's not that there weren't conservatives or liberals in town and people who disagreed with each other, but it wasn't a place of widespread bitter political polarization.

And what I found was that during the time when Act 10 was so hotly debated and there were protests around the statehouse, that things got a little bit hotter politically in Janesville.

People were angry at school teachers, for instance ... (Walker) came in quick and cut back benefits, cutback negotiating abilities for union workers, public union workers, and there were people in Janesville who began to resent the school teachers who still had their summers off and their pensions.

So some of the kind of broader anger, the broader polarization that welled up in Wisconsin filtered down the interstate to Janesville.