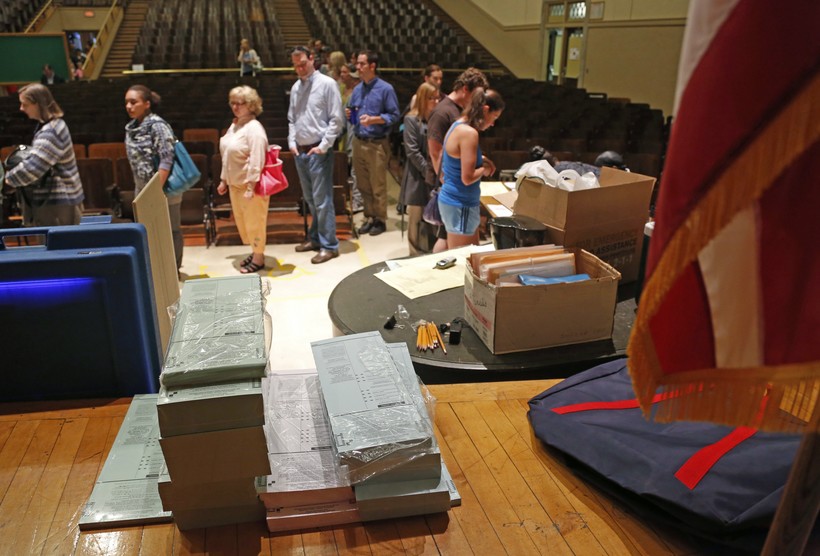 In this June 5, 2012, file photo, voting ballots are stacked and ready as voters wait in line to cast their ballot in Milwaukee.

A federal judge has scheduled a hearing for next week to consider a motion by voter ID opponents to block the law ahead of the Nov. 8 election.

Western District Court Judge James Peterson will also use the hearing to discuss a state investigation into recordings that allegedly show eligible voters being turned away from getting IDs.

"The parties should be prepared to discuss whether any of the relief requested by plaintiffs is necessary or appropriate," Peterson wrote.

The audio recordings were made public by a group called VoteRiders. In a sworn declaration to the court, the group's Molly McGrath said they feature Wisconsin Division of Motor Vehicle employees giving people incorrect advice about what to do if they lack IDs. For example, one of the recordings features a man being denied an ID and directed away from a petition process for people who can't easily get identification.

Peterson ordered the Wisconsin Department of Justice to investigate the recordings after he read about them in news accounts. The results of the DOJ's investigation are due Friday.

Attorneys for the liberal One Wisconsin Institute, the group leading the lawsuit, have seized on the recordings as further proof that the voter ID law is flawed.

"This evidence makes clear that the State does not have — and is incapable of implementing — a functioning safety net for its strict voter ID law," they wrote in their motion asking Peterson to block voter ID.

"I think that's unlikely," said Steven Wright, a clinical instructor at University of Wisconsin Law School who previously served as a trial attorney in the Voting Section of the United States Department of Justice.

"The U.S. Supreme Court and other federal appellate courts have cautioned judges against changing the rules so close to election day," Wright said.

University of California-Irvine Election Law Professor Rick Hasen also said timing would be an issue in the case.

"The closer it is to the elections, the more wary the courts are supposed to be wary about making changes," Hasen said.

Hasen and Wright said Peterson would also have to weigh recent voter ID rulings by the 7th Circuit Court of Appeals in Chicago. It upheld Wisconsin's law two years ago, and earlier this year it blocked a federal judge in another lawsuit from instituting a new system where people sign sworn affidavits to vote if they lack photo IDs.

But both experts also said there was a chance Peterson would order a more incremental change because the court of appeals had empowered him to make sure the DMV was implementing the voter ID law properly.

"If there is a systemic problem that individuals aren't being given free and prompt IDs that they can use to vote, the court may decide to reach in and may decide to actually propose an implement a remedy of its own," Wright said.

Hasen called the situation at DMVs an example of "bureaucratic incompetence."

"The court’s going to have to figure out what is the best way to deal with this on an emergency basis," Hasen said.

The hearing is scheduled for Wednesday, Oct. 12, at the Western District Courthouse in Madison.