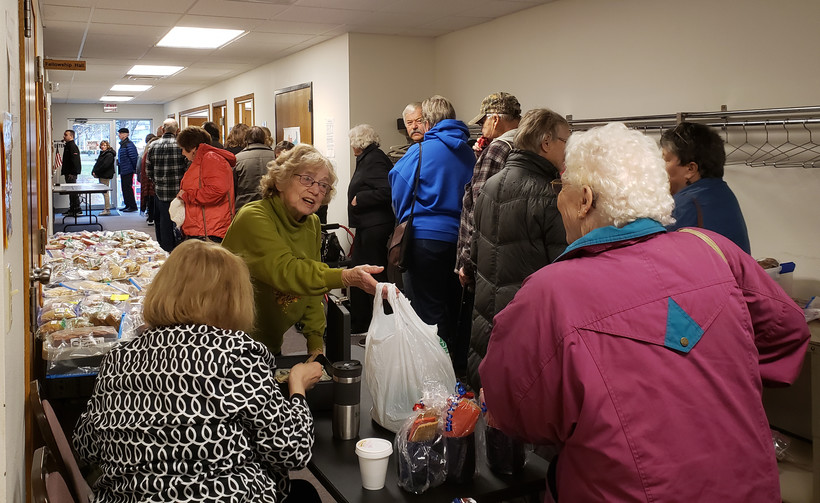 Dunn, Chippewa Counties Being Watched As Having Potential To Swing Region Democratic
By Elizabeth Dohms
Share:

At Christ Lutheran Church in the Dunn County city of Menomonie on Tuesday morning, the hallway was full as a line of awaiting voters crowded inside to escape the rain and cold weather.

As voters came and went to cast their ballots in the midterm elections, there was just enough room for tables filled with baked goods and tended by church members who were selling them.

The foot traffic was steady. In two of the larger wards in this city of about 16,000, voting numbers at the church topped 200 just after 9 a.m.

One of the voters at the church, Joanne Balyeat, said she voted for incumbent Republican Gov. Scott Walker, justifying her vote as necessary because she's a National Rifle Association member. She said she doesn't always vote Republican, saying most politicians become crooked once in office.

Randy Bongard voted for Walker, too, saying the governor made promises that he kept. He specifically referenced Act 10, which stripped most collective bargaining rights from public-sector unions in the governor's first years in office. And even though Bongard identifies himself as "more old-school, traditional," the Menomonie man said Rodney Dicus — a Democrat — is his pick as the next sheriff. He said he views Dicus as a "conservative Democrat" who shares his same values.

Despite that, a majority of those interviewed for this article said they cast ballots for Walker. One voter, who declined to provide his name, said he didn't want his vote for Walker to become public for fear of the response from his more liberal-minded neighbors and community members.

Michel Brandt said he cast his ballot for almost all Democrats, including Walker's Democratic challenger Tony Evers. Brandt said he voted at another one of the larger wards in Menomonie, and said he believes the region is pretty well split among red and blue voters, which jives with the long history of these parts of western Wisconsin. Many have noted that voters in this area have often alternated their support between the major parties.

But whether this long-held purple region will support Democrats this cycle and signal a "blue wave" — as some prognosticators have claimed — has experts unsure and left party advocates divided.

One political science expert said the results from Dunn and Chippewa counties might best predict whether a Democratic win will sweep the region. Geoffrey Peterson, a University of Wisconsin-Eau Claire political science professor, said counties with larger populations could be enough to swing the vote in key races.

Dunn County feeds parts of the 23rd, 31st and 10th state Senate districts and gave President Barack Obama a win in 2012. Most western Wisconsin counties were split on whether to support Obama or his challenger Mitt Romney, with counties such as Chippewa, Pierce and St. Croix supporting the Republican Party candidate that year.

In 2016, voters in the 10th state Senate District — comprised of nearly all of St. Croix and Polk counties and parts of Burnett, Pierce and Dunn counties — handed Republican legislator Sheila Harsdorf a win with about 56,500 votes, or 63 percent of the total votes cast, in the district. In that same district, Republican Donald Trump won the district with 17 percentage points.

Brian Westrate, 3rd Congressional District chairman for the Republican Party of Wisconsin, said he doesn't expect a blue wave across Wisconsin, nor nationally, saying he believes Walker and Wisconsin Attorney General Brad Schimel will win by about 4 percent.

"We may lose an Assembly seat in the region, but I expect that the makeup of the state Assembly will be within five seats of its current composition going into the next legislative session," Westrate said.

The Assembly is made up of 64 Republicans and 35 Democrats.

Westrate's message that economic growth is one of the most important issues to constituents in western Wisconsin ties into what he said are the successes of Walker's leadership over the past eight years.

"The political energy in the area is strong with longtime Republicans, and those new to the party following 2016, having come together to passionately pursue victory for our candidates," Westrate said.

But Martha Laning, chair of the Democratic Party of Wisconsin, said she is hearing concerns about health care, the school funding formula and worn-out roads facing residents in western Wisconsin.

"Those are the issues we're seeing Wisconsinites care about and it's not surprising that Democrats are seeing enthusiasm for their proposals," she said.

Even with health care as a main issue for Democrats, it's not enough to sway voters such as Rose and Kevin Dusso. They identified health care as one of their primary concerns this year and cast their ballot for Walker.

After Harsdorf resigned her seat in the Legislature in 2017, the political tides began to shift in the area. Walker had appointed her as secretary of the Wisconsin Department of Agriculture, Trade and Consumer Protection after its previous secretary retired.

In an upset for Republicans who had held the district since 2010, Democrat Patty Schachtner took the seat in a special election with an 11 percent lead over Republican Rep. Adam Jarchow.

"Patty Schachtner won because she did a much better job of turning out the votes of her base," said Mort Sipress, a political science professor emeritus from the UW-Eau Claire. "That's going to determine what happens Tuesday, as well."

The idea of a potential blue wave kept growing in the state Supreme Court election in April as voters in the majority of western counties shifted views and elected Rebecca Dallet, a more liberal candidate.

Despite these rumblings of a blue wave surfacing in western Wisconsin, Peterson said Schachtner's win doesn't necessarily indicate a wave is happening.

"One election does not a wave make," Peterson said. "It also doesn't rule out that it's going to happen."

Craig Brooks, chair of the Democratic Party in Buffalo County, maintains it's a possibility — although he's hesitant to make a strong guess. Brooks said the fact that Mondovi's former mayor, Republican Treig Pronschinske, lost the mayoral race in April by a wide margin is a sign that people want change. Pronschinske also is the representative for the 92nd Assembly District.

But Alan Walker, chair of the Republican Party of Polk County, said the area is full of independents or libertarian-minded voters, some of whom didn't vote in the 2016 primaries for either major party, but ended up favoring Trump, leading to a strong lead over Democrat Hillary Clinton in the general election.

The swath of candidates won't be enough to swing their votes to the left, Walker said, because of the enormous improvement in the economy that Polk County has seen. Walker pointed to the unemployment rate moving from 6 percent in January 2016 to about 3 percent in May 2018.

While the Marquette University Law School Poll and others have indicated a tight race between Evers and Walker, and show Democratic U.S. Sen. Tammy Baldwin with a comfortable lead over her GOP challenger state Sen. Leah Vukmir in the U.S. Senate race, no data is readily available for the state Senate and Assembly races, making it harder to predict what will happen in those districts.

But polls have been wrong before, most notably in the 2016 election for president with a high-strung race between Trump and Clinton. Such miscalculations make experts and advocates hesitant to predict anything in the state's upcoming elections.

"It remains to be seen, whether there's going to be a blue wave or a modest gain for the Democrats," said Sipress, the UW-Eau Claire professor.