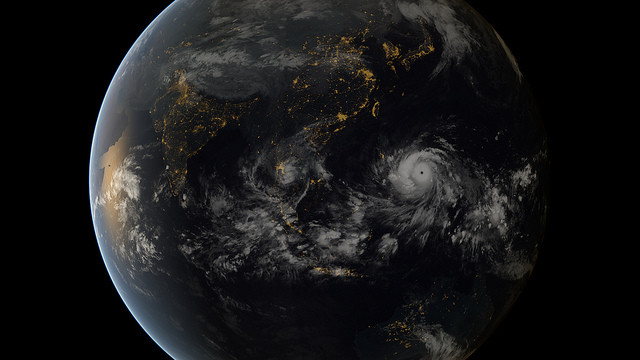 Typhoon Haiyan, as observed from space.  Photo by NASA Goddard Photo and Video

Nearly a week after Typhoon Haiyan ripped through the Philippines -- claiming the lives of thousands -- significant relief efforts are underway.  While supplies are starting to hit the ground, one relief expert cautioned against expecting immediate results from the help.

“This storm flattened a huge area,” said Jon Brause, director of the World Food Programme in Washington, D.C.  “There’s really no infrastructure left.  It’s going to take months to get roads cleared, infrastructure back in place, electricity, water … and then we’re going to have to get people back to work as well.

At its peak, the storm reached wind speeds of 195 mph, leaving complete devastation in its path.

“Consider (Hurricanes) Katrina and then Sandy just to get an image of how bad this is, and then take it up a notch from there,” Brause said.  “This is probably the worst storm in recorded history.”

Brause said food is now becoming available, but transporting it to affected areas becomes the next problem.

“There isn’t trucking,” Brause said.  “You have to bring trucks in, which we’re doing.  We’re also bringing in barges and smaller coastal vessels that we can load with relief items and then move around to some of the smaller communities around the various islands.”

That relief effort doesn’t stop after basic supplies are delivered.  Brause said his organization, along with others, are committed to getting things cleaned up, getting people back to work, and getting local economies up and running again.

Many are wondering about the best way to personally contribute to the relief effort.  Brause was clear that money is the best option.

“If you try to donate anything else … it just complicates logistics even further trying to move in other items,” Brause said.