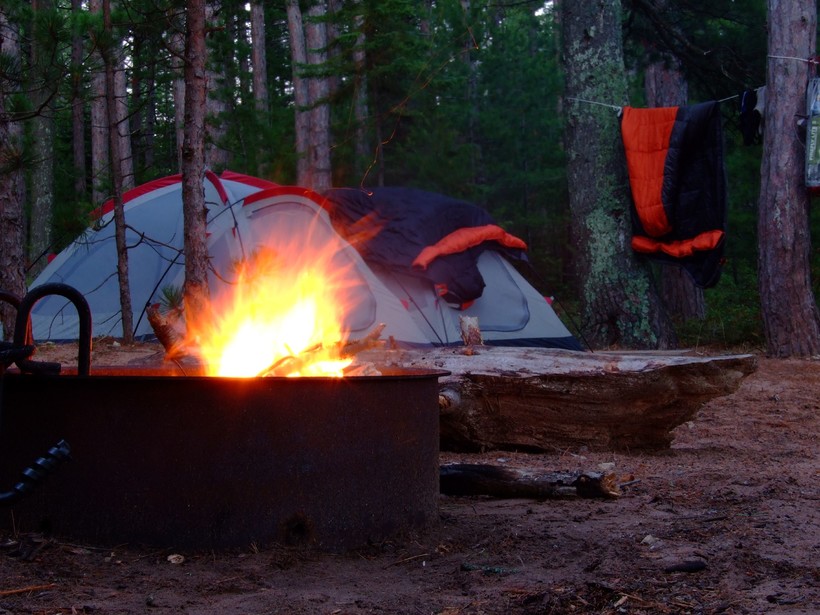 With summer unofficially kicking off this Memorial Day weekend, Wisconsin campsites are likely to be popular destinations. And according to a Madison-based camping expert, there are many ways to do it and they offer something for everyone’s level of comfort.

The state Department of Natural Resources’ website says there are more than 4,900 campsites in the Wisconsin State Park System, including family and outdoor group sites, indoor group camps, backpack, hike-in and canoe-in sites and even equestrian campgrounds.  Cabin rentals are also available at certain parks.  (More information about the various options can be found here.)

To travel blogger Kevin Revolinski, author of "Best Tent Camping Wisconsin: Your Car-Camping Guide to Scenic Beauty, the Sounds of Nature and an Escape from Civilization," camping is all about getting away from one’s routine and simply getting out of the house.

"Green space, I think, being in the middle of nature for a couple of days and just get some time to kind of clear your head," he said.  "Wake up to the birds, that sort of thing.  It’s healthy for the mind."

In addition, Revolinski said he enjoys being a little uncomfortable and free of modern luxuries and conveniences.  He recalled happy childhood experiences of setting up tents over rocks and tree roots, but acknowledged that he no longer sleeps directly on the ground and recommended sleeping pads for cushion.

Two other supplies he suggested rookie campers consider bringing are ear plugs and sleeping masks.  With the Sun currently rising just after 5 a.m. in eastern Wisconsin -- and coming up earlier and earlier until the summer solstice on June 20 -- some people may not be terribly keen on waking up at the crack of dawn.  And for those accustomed to city life, Revolinski said people might want to pop in a pair of ear plugs due to the "incredible" number of birds.

"First-timers might be freaked out by that," he said.

As for where to pitch a tent, Revolinski said his favorite spots are near water, including Newport and Rock Island State Parks in Door County and Big Bay State Park on Madeline Island in Lake Superior.  Along rivers is another popular choice of many campers, especially those who enjoy paddling, such as the 92-mile stretch of the Wisconsin River from Sauk City to near Prairie du Chien, where camping is free on the sand bars.  He also praised the St. Croix National Scenic Riverway in western and northwestern Wisconsin and the Flambeau River, also in the northwest.  Near the top of his list, though, is the Turtle-Flambeau Flowage in Iron County, which boasts 66 remote campsites -- some on small islands -- and are free on a first-come, first-serve basis.

"You’re really truly out there in the middle of nothing and on a little island of your own and you’ve got a little -- it’s not even an outhouse, it’s an out," he said. "It’s just a toilet in the middle of the woods."

Reservations inside the State Parks System can be made up to 11 months in advance or as late as two days before occupancy.

For more information on reserving a campsite, visit here.