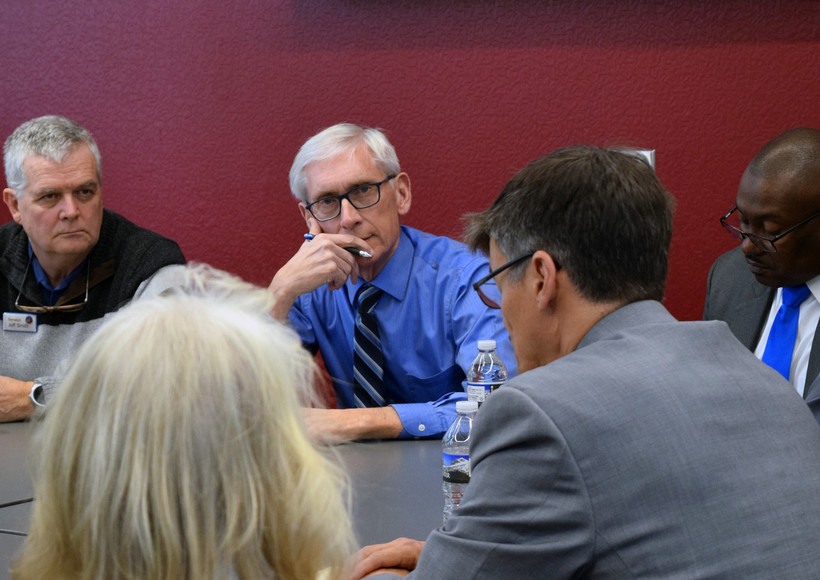 Wisconsin Gov. Tony Evers is calling for increased funding to help communities reduce the risk of flooding. But Republican legislative leaders say they won’t consider the bills in 2020.

Evers announced a package of bills on Tuesday to provide more funding for local governments to deal with flood damage and mitigation.

During an event in Arcadia to talk about regional flooding issues, Evers said he’s hopeful the legislation will be taken up by lawmakers before the end of the session.

"They’ve got plenty of time to do things. We’re nine months away from the election. So hopefully we'll be able to get some energy. And most of the bills are bipartisan," Evers said.

But Assembly Speaker Robin Vos, R-Rochestor, said in a statement Tuesday that the Assembly is done for the year.

"We can look to consider these ideas for next session and hopefully, it can be a truly bipartisan package with legislators from both parties on a vast majority of the bills similar to what has occurred with Speaker Task Forces for the last eight years," Vos said in an emailed statement.

One of the six bills supported by Evers would create a flood mitigation program under the state Department of Transportation to reimburse counties and municipalities for up to 50 percent of the cost to replace or modify highway culverts and bridges at risk of flood damage.

Other bills would provide a $10-million increase in funding for the Wisconsin Department of Natural Resources' municipal flood control program and increase grant funding for county land and water conservation projects through the state Department of Agriculture, Trade and Consumer Protection.

Evers said at the Arcadia event that he wants to help communities reduce the impact of future flooding.

Vicky Grulkowski, who lives on a farm 5 miles north of Arcadia, said she was optimistic some of the proposed increases in state programs could help her family. 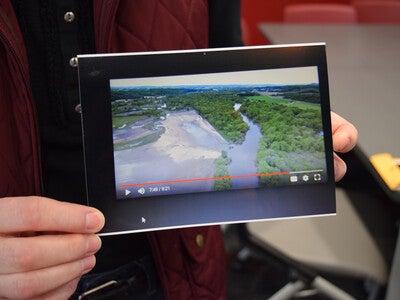 Vicky Grulkowski holds an image from a drone of flooding from May 2017 on her farm north of Arcadia. Hope Kirwan/WPR

Major flooding on the Trempealeau River in May 2017 carved out 135 feet of river bank along her farm and damaged a 15-acre cornfield. She brought along a picture of the flooding to show the governor.

"We've been trying to work on applying for several (grant) programs and haven't been successful in getting something to close that hole in the riverbank" Grulkowski said.

Barb Tock is chairperson for the Town of Arcadia, which covers the largely rural area north of the city. She said her town would like to improve roads and bridges to make them more resilient to future flooding. But her community doesn't have the budget for the needed work.

"Everything comes down to money. It's a money-related issue. And we're trying to do our best as far as working with the resources we have, but there's no perfect solution. And timeliness is always an issue," Tock said.

Tock said the governor’s emphasis on mitigation is a positive step. She said repairing damage after flooding has been a drain on the community’s resources and doesn’t fix the underlying problems.